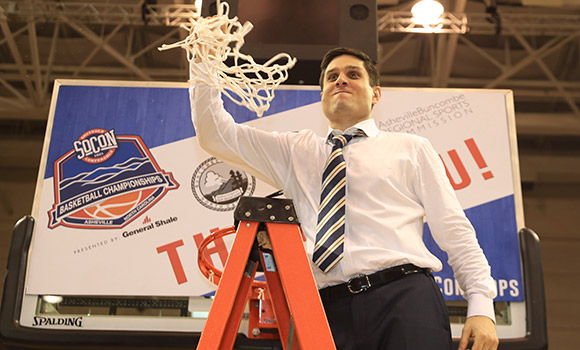 UNC Greensboro has announced the extension of head men’s basketball coach Wes Miller’s contract through the 2028-29 season. The agreement in principle comes after Miller’s program won a school-record 27 games and earned the first bid into the NCAA Tournament since the 2001 season.

Under Miller’s guidance, the men’s basketball team has won back-to-back Southern Conference Regular Season Championships and its first SoCon Tournament Championship since 2001. UNCG men’s basketball has won more games in the last two seasons than any other two-year period in school history and has made the postseason for three straight years, doubling the all-time total for postseason appearances in program history. The Spartans represented Greensboro and the SoCon well in the NCAA Tournament, playing fourth-seeded and sixth-ranked Gonzaga down to the wire before a last minute three-pointer edged the Spartans, 68-64.

The extension will add seven years to Miller’s contract and increase his base salary to $301,150 annually. It will also increase his retention bonus and performance-based incentives. This season, Miller brought the Spartans into the national spotlight, not only by winning the SoCon Tournament and appearing in the NCAA Tournament, but Miller’s Spartans also defeated NC State on the road in the non-conference portion of the season, earning UNCG’s third win over an Atlantic Coast Conference program.

“This extension is not simply about recognizing the sustained, historic success Wes has delivered for our program over the past few seasons, but it is also an investment in the future of our men’s basketball program and a statement that as we raise our performance, we have also raised our expectations,” said UNCG Director of Athletics Kim Record. “Building the premier program in the Southern Conference and competing for championships is a significant initiative in our Spartan Way strategic plan. Under Wes’ leadership, the team has performed tremendously well on the court and has inspired our school and energized our city. Moreover, the success on the floor is more than matched by the performance of our student-athletes academically, where grade point averages and graduation rates in men’s basketball have reached all-time highs as well.”

“My wife Ashley and I are thankful to Chancellor Gilliam, Kim Record, and everyone at UNCG for their continued belief in our men’s basketball program,” said Miller. “We’re proud of our program’s growth over the last few years and we’re energized and thankful for the opportunity to continue building on our foundation of excellence. I feel incredibly fortunate to be able to continue coaching in my hometown, and I love our returning and incoming players.”