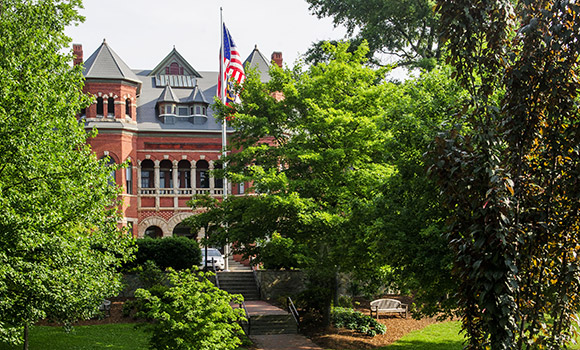 June 2 marks the beginning of UNCG’s 125th anniversary celebration, a yearlong commemoration of UNCG’s history of opportunity and excellence as the university looks forward to the future.

The celebration kicks off exactly 125 days before Founders Day, Oct. 5, with the unveiling of a new anniversary website, commemorative video and visual mark.

The interactive site includes downloadable “digital swag” for social media, smart phones, tablets and computers, a drone tour of campus, digital yearbooks, and other unique ways for the UNCG community to explore the university’s history and participate in the celebration.

A special 125th anniversary event will be held on Aug. 8 in conjunction with Chancellor Franklin D. Gilliam, Jr.’s State of the Campus Address. On Founders Day, the university will host a campus-wide celebration with a free concert. Additional details will be announced later this summer.

Throughout the year, students, alumni, faculty, staff, and friends are encouraged to share their UNCG story on social media using the hashtag #UNCG125. Anniversary-related posts may be featured on the anniversary website.

The institution was chartered in 1891 and welcomed its first class of students – approximately 200 women – nearly 125 years ago on Oct. 5, 1892. Now, UNCG is the largest university in the Piedmont Triad with nearly 20,000 students and more than 2,500 faculty and staff.

To learn more about UNCG’s history, the anniversary celebration, and the university’s plans for the future, visit 125.uncg.edu.