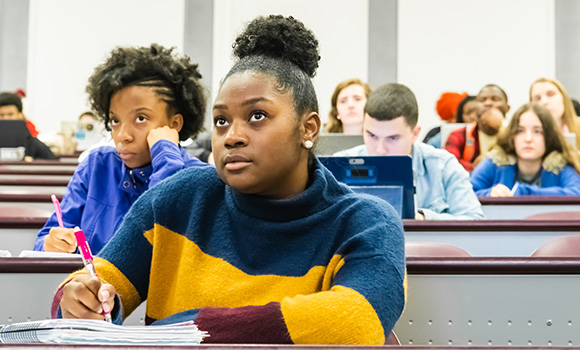 UNC Greensboro is part of a big initiative.

It has joined a massive new effort in which 130 public universities and systems will work together to increase college access, close the national achievement gap, and award hundreds of thousands of more degrees by 2025.

The Association of Public and Land-Grant Universities (APLU) – a research, policy, and advocacy organization dedicated to strengthening and advancing the work of public universities – organized this national initiative. Known as Powered by Publics: Scaling Student Success, the initiative was launched in November at the APLU’s annual meeting.

The three national goals for the collaborative initiative are:

This Southeastern Cluster goal will be improving the transfer student experience.

“We think that transfer students – already incredibly important to this institution – will become even more so as we anticipate they may be a growing share of our student population going forward,” said Provost Dana Dunn. “As you know, we’ve been doing a lot of work to develop co-admission agreements (with community colleges) and make that transfer process as seamless as possible. Having this theme for our APLU work will help us focus even more on the transfer students.”

She noted the variety of transfers UNCG receives – some are from UNC System institutions while many are from outside the system. Some transfer early in their college career; some transfer late. Some are from rural areas; many have limited financial means.

“We are a university that has differentiated ourselves in terms of a very deliberate and tenacious focus on student success,” she said. “We want to ensure the success of all our students. We don’t want demography to be destiny.”

UNCG is dedicated to student success and educational access. “We want students from underrepresented groups, we want students who are Pell eligible – we want all students to have uniformly high levels of achievement. And in the broadest sense, that achievement metric is successful continuance at the University, and, ultimately, graduation. So because this APLU initiative is aimed, first and foremost, at increasing the number of college graduates nationwide, we’re a natural participant.”

“It’s very compatible with the work we’re already doing under the Frontier Set initiative,” she noted.

In 2017, the University was selected for the Bill and Melinda Gates Foundation’s Frontier Set, 31 educational institutions across the country transforming the way they operate to improve student success in learning, credential or degree completion, and transition to the labor market. The project seeks to identify successful strategies to improve graduation rates, especially for low-income and first-generation students and students of color.

She also noted UNCG, through innovative strategies and diligent effort, has surpassed the goal set by the UNC System for success of low-income students and students from rural areas.

“So we have almost a perfect storm of the UNC System’s strategic plan metrics, the Frontier Set imperative to work on these issues, and now the APLU imperative,” she said.

UNCG has developed a national reputation for transformation initiatives to bolster student success, as seen in this recent case study report. The APLU initiative is one more way to not only enhance its efficacy, but share with others what works best.

“Ultimately, the idea is that all of these (APLU transformation clusters) institutions will be models for the total population of four-year universities and colleges, but right now the focus is on that ‘community of practice’ within each of the clusters, because we’ll be working around these common themes.”