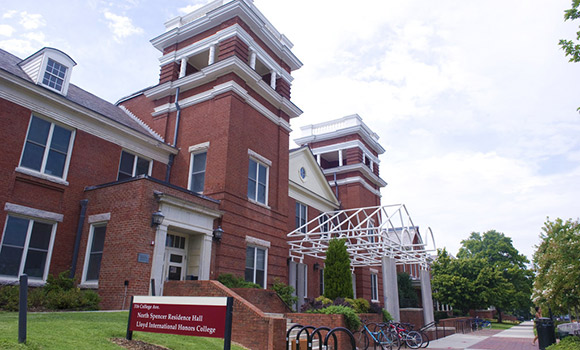 This year marks the 50th anniversary of the first graduating class of Katharine Smith Reynolds Scholars at UNCG.

Since its inception, more than 500 Katharine Smith Reynolds Scholars have graduated from the university. Through the receipt of this award, these remarkable scholars have been provided the tools they need to excel within and beyond the classroom, serve their communities, and become exemplary leaders.

“Without this life-changing scholarship, I probably would not have attended UNCG,” said Alyssa Sanchez, a Reynolds Scholar majoring in biochemistry (pre-pharmacy) who will graduate with full honors in 2019. “Affiliation with the Z. Smith Reynolds Foundation has provided opportunities for me to grow as a student and leader. By having financial support of my goals in community service, studying abroad, and internships, I have been able to strive and achieve far more than I imagined coming into my undergraduate career. It’s difficult to describe how motivating it is to have someone financially ‘bet’ on your success. Achieving is the least that I could do to repay the Z. Smith Reynolds Foundation for all that they have done for me.”

In 1962, Z. Smith Reynolds Foundation Trustees established a merit-based scholarship program at UNCG, then Woman’s College of the University of North Carolina, to commemorate the life and legacy of alumna Katharine Smith Reynolds – wife of R.J. Reynolds and mother of Z. (Zachary) Smith Reynolds.

The first scholarships were awarded to women, all residents of North Carolina, in their freshman year (1963-1964). The scholarship was expanded to male students in 1980, effective during the 1981-1982 academic year. In 1997, the Z. Smith Reynolds Foundation pledged $5 million to the university over 10 years – $4.3 million of the pledged amount was to fund the Katharine Smith Reynolds Scholarship Endowment, and $700,000 was reserved for support of out-of-classroom learning activities such as travel abroad, research, and service projects.

“Reynolds Scholars embody the best of North Carolina’s students. High-achieving, community-engaged, globally minded, and forward-looking, our scholars develop as leaders in their respective fields of study, refining their academic and social skills through innovative pedagogy, research, and experiential learning opportunities in the Honors College.”

Scholarships are competitive and awarded to students on the basis of superior achievement and potential, qualities of leadership, evidence of interest in others, and motivation toward useful purposes in life. Reynolds Scholars receive four years of generous funding and are eligible to receive stipends for community service involvement, participation in an internship, and study abroad.

“Katharine Smith Reynolds was an extremely visionary, forward-thinking woman, who played an integral role in laying the groundwork for the way in which the Foundation has approached its work for decades,” said Dr. Lloyd “Jock” Tate, president of the Z. Smith Reynolds Foundation. “The Katharine Smith Reynolds scholarships have provided educational opportunities for so many students, and have also been an important way to honor the life and legacy of such an influential individual in the Foundation’s history. We are grateful to The University of North Carolina at Greensboro for all their work to oversee these scholarships for 50 years and are glad to be a partner with them in this endeavor.”