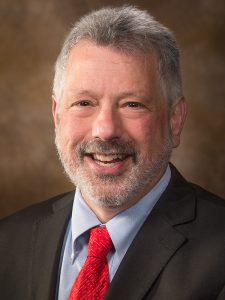 UNC Greensboro today announced that Dr. James (Jim) Coleman will become the University’s new Provost and Executive Vice Chancellor beginning August 1. He will also serve as Professor in the Department of Biology.

Coleman comes to UNCG from the University of Arkansas, where he has served in the equivalent role since January 2017. As the chief academic officer at Arkansas, Coleman led efforts to amplify student success outcomes aimed at improving retention, graduation rates, closing achievement gaps, and post-graduation success. He drove the implementation of several strategies, including using data analytics to identify students with the highest likelihood of not completing a degree and launching a proactive, holistic advising program to support those students.

Coleman also played a leadership role in the conceptualization of a $45 million stand-alone student success center. Coleman helped lead the process to identify signature research areas at the University of Arkansas, including a new interdisciplinary and integrative institute, and played a leadership role in the development of a proposal that led to a $23.7 million gift to build research and commercialization infrastructure. During his tenure, research reached record levels of $180 million in 2019, increasing by over $35 million.

He is a proven champion of increasing diversity, creating an inclusive environment, and designing and implementing programs for equity for and among students, faculty, and staff.

“Jim is well positioned to lead academic affairs here as he brings the kind of experience, expertise, and proven results to navigate the complex environment we now face,” said UNCG Chancellor Franklin D. Gilliam, Jr. “Our goal was to hire an entrepreneurial and forward-thinking provost, experienced in higher education and knowledgeable about its operations and economics, committed to our mission and values, with the personal integrity and drive to build on our forward momentum. We have clearly found that, and more, in Jim. He is passionate about the transformational power of public higher education and the public mission and is, quite simply, the right person for the job.”

Coleman’s more than 30 years of professional higher education experience includes service as the provost and professor of biology at Northern Arizona University, dean of the College of Humanities and Sciences and biology professor at Virginia Commonwealth University, vice provost for research and professor of ecology and evolutionary biology at Rice University, vice chancellor for research and biology professor at the University of Missouri, and vice president for research and business development at the Desert Research Institute. He served as program officer for ecological and evolutionary physiology at the National Science Foundation and began his career as a professor of biology at Syracuse University after conducting postdoctoral research at Harvard and Stanford University. Coleman received his Doctor of Philosophy from Yale University’s School of Forestry and Environmental Studies as well as a Master of Philosophy and Master of Science. He received his Bachelor of Science in forestry from the University of Maine.

Coleman is also an accomplished plant physiological ecologist, authoring or co-authoring more than 75 papers that together have been cited nearly 8,000 times. He has been the principal/co-principal investigator on over $64 million of grants and cooperative agreements. He was elected as a Fellow of the American Association for the Advancement of Science.

Coleman will spend the month of July working with Provost Dana Dana on a seamless transition until she steps down on July 31 and returns to the faculty.