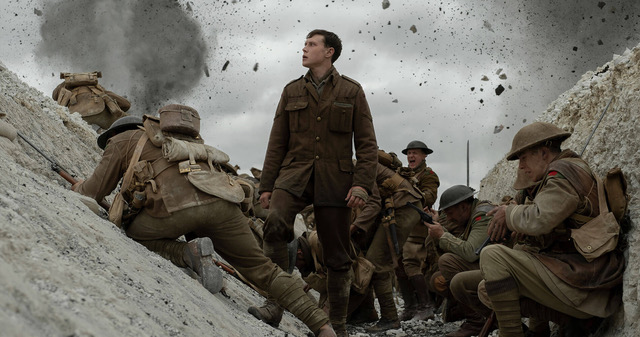 On February 9, John Hilary Shepherd, a UNC Greensboro (UNCG) alumnus and native of North Carolina, is hoping to add a big accomplishment to his collection: a credit on an Academy Award-winning movie. The WWI feature “1917,” which he developed with New Republic Pictures, is up for Best Picture. The film has already received two Golden Globe awards for Best Motion Picture and Best Director.

“We’re keeping our fingers crossed,” Shepherd said. “As one of our company’s first films, it’s a rather auspicious debut. There’s a lot to live up to.”

Since graduating from UNCG in 1989 with a degree in broadcast cinema (now media studies), Shepherd has served as a creative developer on some impressive movies—Black Swan, Hacksaw Ridge, Rocketman—the list goes on.

He’s worked closely with Scott Silver (writer of The Joker), Thom Mount (producer of Bull Durham) and Darren Aronofsky (director of Black Swan). He even wrote for the hit show, “Nurse Jackie,” earning him a Best New Series nomination from the Writer’s Guild of America.

Here, Shepherd discusses why he said “yes” to producing “1917,” his early love of cinema and his nurturing experience at UNCG.

As vice president of development for New Republic Pictures, Shepherd is constantly on the hunt for new hits.

“I’m out there looking for creative material that will make strong movies—original screenplays, old movies to remake, books that would adapt well into features,” he said. “Then once we’ve found a project, I’m reading drafts of the scripts, giving notes to the writers, meeting with directors, talking to managers of talent that might be right for the movie’s characters.”

The film “1917” is particularly celebrated for its technical prowess, as the whole movie is made to look as though it is one long, continuous shot. Yet Shepherd and producer Brian Oliver at New Republic could not see this top-of-the-line craft when deciding whether to produce and finance the project.

“What you can see is the story,” he said. “And that in and of itself was so compelling—about these two young soldiers going through one day and seeing many of the horrors of war. I teared up reading the script.”

Another deciding factor was the recent success of Peter Jackson’s 2018 WWI documentary, They Shall Not Grow Old.

“We could see from [Jackson’s] documentary that there was still an interest in historical stories of WWI,” said Shepherd. “It was extremely compelling and successful.”

Finally, there was the director: Oscar-winning, Tony-winning Sam Mendes, whose recent movies—Skyfall and Spectre—were huge financial and creative successes.

“You cannot get more A-list than Sam Mendes and the team from the Bond Movies,” Shepherd said. “These factors made us comfortable committing a large amount of money to ‘1917.’”

On His Love of Cinema and Experience at UNCG

“I was always a ham and a performer as a child, going back to when I was 2 years old … and quite obsessed with TV.”

By the time he was 12, Shepherd was trekking to the public library to read “Variety” and other entertainment trade magazines. He chose to attend UNCG because of its high caliber theater and cinema programs. What he also discovered was an inclusive environment.

“As a young gay man, I found UNCG to be a very welcoming, nurturing place,” Shepherd said. “Even in the mid-80s it already had a strong LGBTQ community.”

He then went on to get his MFA in screenwriting from the American Film Institute (AFI) in California, where some of his fellow students and friends were Darren Aronofsy, Todd Field and Scott Silver—big names in the film industry. Talented classmates coupled with a “formative” internship with producer Thom Mount launched his career.

It’s a career that now leaves him happy to be involved with a potential Oscar-winner.