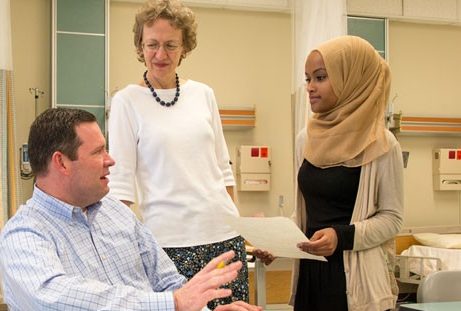 The late Daphine Doster ’27 led an adventurous life of service. Her foundational music degree from North Carolina College for Women fostered six years of music teaching in North Carolina public schools. When her father became ill, Doster boldly traveled beyond her home state, attending nursing school at Johns Hopkins Hospital and later serving as a U.S. Army surgical nurse and operating room supervisor in the Asiatic-Pacific Theater of WWII. Doster earned her master’s degree in public health in 1948 and was appointed to the Commission Corps of the U.S. Public Health Service. She subsequently established the first nursing baccalaureate program at the University of Arkansas.

Returning to North Carolina in retirement, Doster settled in Charlotte and married a former Red Cross worker she had met 45 years previously! Doster and her husband, Joe Mastroianni, bestowed generous gifts to nurture the School of Nursing at her alma mater, including a professorship, the N.C. Nursing Historical Collection Fund, and the Daphine Doster Scholarship Endowment in Nursing.

Doster demonstrated brilliance in nursing – a theme reflected in the educational endeavors of her recent scholarship recipient, Zeinab Hassan.

Hassan and her family fled danger in their country of origin, Somalia. They traveled to the United States and made their home in Greensboro, where Hassan attended elementary, middle, and high school. Her brilliance emerged in the International Baccalaureate program at Grimsley High School, from which she graduated with a 5.0 GPA and 30 college credits. The IB program’s global education focus was a natural fit for Hassan, emphasizing academics, personal growth, and civic engagement.

Hassan chose UNCG’s School of Nursing because of its prestige and diversity.

“I have no doubt that UNCG has one of the best nursing programs in the country,” says Hassan. “I knew it would prepare me for my future as a successful leader and nurse … UNCG also has a very diverse culture, and the idea of interacting and learning from people from different cultures and walks of life is really important to me.”

Like her scholarship benefactor, Hassan has a penchant for service: