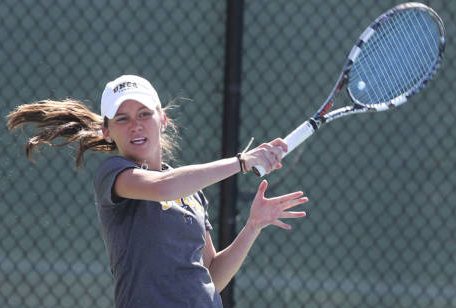 Yasmin Franco ’17 brought her talents to the UNCG women’s tennis team. A 2013 “Four-Star Recruit,” Franco was named to the Southern Conference (SoCon) All-Freshman Team, and distinguished herself on the SoCon Honor Roll each subsequent year. Even a season-ending injury her sophomore year couldn’t keep Franco down; she was awarded a SoCon Commissioner’s Medal (3.5 GPA or higher) – a significant accomplishment for a varsity athlete and nursing major in the UNCG School of Nursing, known for its challenging curriculum.

“Yasmin’s strength was her passion to strive and to be the best possible in any area…her passion for nursing helped her over her four years at UNCG. She had challenges along the way, but she was determined in succeeding at anything she set her mind to.”

A recipient of the Becky Jackson Endowed Athletic Scholarship Fund, Franco was immersed in the experience of competitive collegiate athletics, seminal to Becky Jackson’s focus in establishing this scholarship fund. Becky Jackson ’73, who earned a bachelor of science degree in mathematics, intends the scholarship to support members of the UNCG women’s varsity tennis team, of which she was a member, coached by Elsa Heimerer.

On the tennis court, Franco and Jackson both learned the lessons of dependability, concentration, and strategic collaboration: Consistently support your partner and your team. Franco’s application of the intellect and discipline required for both tennis and nursing demonstrates her strength and versatility.

Whether on the court or in a hospital, always bring your best game.