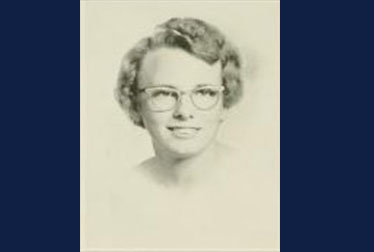 “I was hired as a mathematician, but was trained as a computer programmer.  Computer Science was unheard of then.”
– Treva Daniels Burgess

Growing up on a small tobacco farm in North Carolina, Treva Daniels Burgess came to Woman’s College upon graduating from Bertie County’s Colerain High School in 1956. Her assumed trajectory was to become a high school math teacher and girls’ basketball coach, but Woman’s College would lead her to a future she had yet to imagine.

Making the transition to WC campus required support; Burgess initially received a $100 scholarship and a job in the dining hall to pay for college expenses. Burgess persevered and began adding physics classes to her mathematics course load, resulting in a double major. Burgess’s plans for the future had evolved by her senior year, when a recruiter from the Naval Proving Grounds in Dahlgren, Virginia, offered her a job and changed her life.

Between the time Burgess applied for the job and arrived at work, the Naval Proving Grounds had changed its name to the Naval Weapons Laboratory, reflecting its shift to a facility for research and development. At the advent of satellite technology, Burgess was trained as a computer programmer.

“I remember seeing the headlines in the paper in October 1957, about the launch of Sputnik. At that time I didn’t know that I would spend my career tracking satellites,” she reflected.

When Sputnik, the first artificial satellite, was launched in 1957, two scientists at John Hopkins University Applied Physics Laboratory computed its orbit. Their research led to the development of satellite navigation for the United States Navy. Most of Burgess’s work at the Naval Weapons Laboratory involved satellite tracking, beginning with the Transit Navigational System through the Global Positioning System, familiar in cars and cell phones today.

Burgess’s perspective on life’s possibilities was utterly changed by the education and support she received at WC. She wanted to return the favor to the next generation through planned giving that would establish a scholarship, and in May 2013 she created a Charitable Remainder Annuity Trust.

“My gift is in appreciation of the education I got at WC/UNCG and the help I got along the way … By contributing to a Charitable Remainder Annuity Trust, I not only get the satisfaction of knowing that the gift will help deserving persons, but in addition I get good tax deductions during my lifetime.”