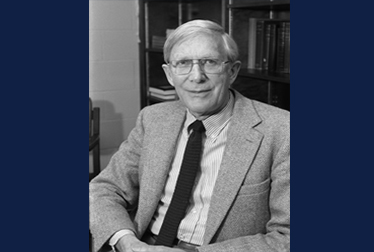 Great professors share their knowledge with students and help them complete their academic goals. But beyond that, they can inspire a lifelong dedication to the expansion of intellectual opportunity.

Baucom remembers Dr. Kendon Smith’s “cubby-hole” office when UNCG’s psychology department consisted of one classroom, one office, and around 100 students. Although she earned her bachelor’s and master’s in French, Baucom eventually pursued graduate study in psychology. As one of Smith’s students, she watched the department progress and she developed a profound respect for Smith’s “ever-increasing knowledge and wisdom.”

“Dr. Kendon Smith was such a phenomenal person — such a mover and shaker — and such a kind and well-meaning person,” said Baucom. “I couldn’t think of a better way to honor the department than to set up something in his name, and I decided to set up a lecture series.”

Each year, the series brings international mind and behavior experts to UNCG for several days to discuss topics of interest to both the academic community and the public.

Cosmopolitan in his beret, Smith attended many of the lectures.

Baucom herself attended every lecture for the first ten years until her move to Texas. She then attended whenever she could, and when she couldn’t, she listened to recordings of the lectures.

“There were no second-rate speakers in the series,” Baucom observed. “Contemporary philosophy, environmental scenes, clinical, experimental — it’s a very wide range and includes an amazing selection of scientists.”

The responsibility of selecting speakers rotates among junior tenure-track psychology faculty, giving them an opportunity to bring in experts who enhance their research programs. Recent topics have included posttraumatic stress disorder, memory across time, and gene-environment interactions, and the research is at once cutting-edge and enduring. While the speakers are in residence, undergraduate and graduate students are invited to talk with them about research or professional development in one-on-one sessions.

“The Kendon Smith Lecture Series epitomizes UNCG’s reputation as a stellar academic institution that is community engaged,” said Associate Professor of Psychology Janet Boseovski, who leads the planning committee for the series. “The intimate nature of the series allows for ample interaction between the guest speakers and faculty, graduate students, undergraduate students, guests, and community members.”

In honoring Dr. Smith and UNCG’s Psychology Department, Baucom created a perpetual and unique learning opportunity, one that connects the University to the surrounding community.