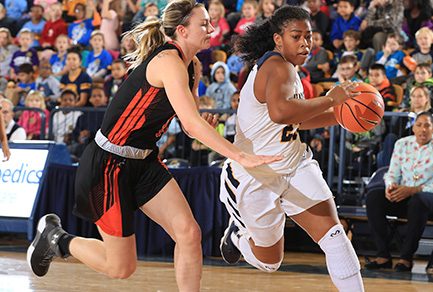 Te’ja Twitty is exactly the kind of player Coach Lynne Agee would have enjoyed coaching.

A freshman leading scorer on the UNCG women’s basketball 2016-17 roster, Twitty had already distinguished herself as a high school champion in Rutherfordton, North Carolina, recognized as All-County, All-Conference, and MVP throughout her high school career. Twitty propelled her high school team to conference regular season and tournament championships. She rewrote her high school’s basketball history – and received an assist from a collegiate history-maker.

Agee challenged herself throughout her career, setting new records in collegiate basketball. After coaching the Roanoke College women’s basketball team to win Virginia’s Division III state title and qualify for the Association of Intercollegiate Athletics for Women national playoffs, Agee came to UNCG. She became the first women’s basketball coach to lead her team to the NCAA tournament in all three divisions:

“I was presented with incredible opportunities and challenges as a basketball coach to take my program from Division III immediately into Division II and that scholarship structure, and then within three years, we took our program into a Division I level. So that challenge to do that and to try and be successful in that scenario in a five-year period was just a challenge I couldn’t refuse.”

From 1981 until her retirement in 2011, Agee led her Spartans to 13 regular season and seven conference tournament titles, amassing 602 career wins (556 at UNCG). A seven-time Conference Coach of the Year, Agee mentored six All-Americans during her tenure at UNCG and in 2004 was the first coach enshrined in the UNCG Athletics Hall of Fame while still active. In 2008 she was inducted into the Guilford County Sports Hall of Fame.

Twitty’s collegiate progress is dynamic: named to the Southern Conference All-Freshman Team and ranked fourth in the SoCon, she is the sophomore co-captain of UNCG’s young team. Twitty challenges herself to lead responsibly and to attain a higher standard, bringing the full force of her capabilities to every practice and game. Consistently committed to Coach Trina Patterson’s championship culture, Twitty inspires her teammates, exemplifying their shared core values of respect, hard work, and discipline. Twitty’s goal:

“Go to the (SoCon) championship – get that ring.”

Agee’s scholarship offers an assist to champions like Twitty, giving them the opportunity to square up and score, on the court and in life.