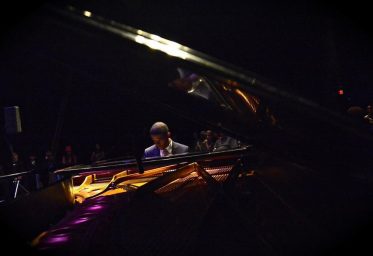 As a seventeen-year-old, Sean Mason won first place in the Loonis McGlohon Young Jazz Artist Competition sponsored by the Jazz Arts Initiative (JAI) and the Blumenthal Performing Arts Center in Charlotte. A four-year veteran of the JAI Youth Ensembles and Workshops program, he was already a devotee of Oscar Peterson, Charlie Parker, Bill Evans, and Erroll Garner, and had made his way into Miles Davis, John Coltrane, Herbie Hancock, Chick Corea, and Keith Jarrett.

He was a part of the JAI All Star Jazz Youth Ensemble and was the featured jazz pianist before a concert by trombonist and composer Delfeayo Marsalis at the Loonis McGlohon Theater in Charlotte’s Spirit Square. Mason was also the organist and pianist at Mt. Carmel Baptist Church.

“I went to UNCG early one morning in January last year, and I had all of my songs prepared and whatnot, and I was so nervous that day,” he said. “A couple weeks later I got a call from Steve Haines.”

From the director of the Miles Davis Jazz Studies Program at UNCG, Mason received the news that he was not only admitted to the UNCG School of Music, but also had received the Alyse Smith Cooper Music Scholarship. He was overjoyed, because it was his dream to continue playing music and earn a college degree.

Mason had a fantastic freshman year, and appreciated the individualized instruction he received in music and the community he found among his peers and instructors.

“I was really able to enjoy the joys of being a part of the UNCG music community,” he said. “All of my professors carry a high-spirited energy with them all of the time. That energy is contagious. It’s very supportive here, and I love everything about it.”

During his first year, Mason also had the rare opportunity to play with his jazz combo for members of the Jazz at Lincoln Center orchestra in a clinic held in the UNCG Music Building.

“I think those are connections I’ll keep for a lifetime,” said Mason.

She was a lifelong member of Front Street United Methodist Church and for many years, was the organist there. She was a devoted supporter of music scholarship awards for undergraduates, like the one that Sean Mason was granted.

Now, at the beginning of his sophomore year in the Jazz Studies program, Mason anticipates another year of receiving top quality instruction, playing in ensembles in the Music Building, and playing in casual jam sessions with his peers.

“UNCG made me feel like family from the first day,” he said. “I’m looking forward to growing the relationship I have with the School of Music.”