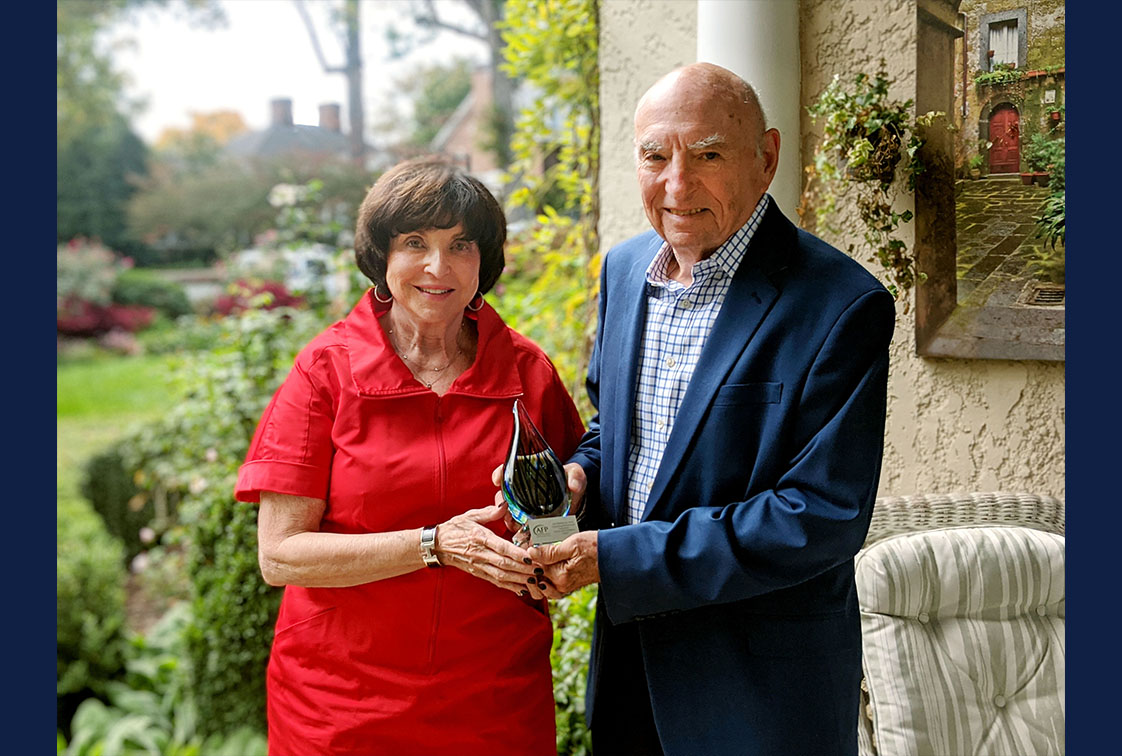 Sylvia and Norman “Norm” Samet are the 2020 recipients of the Association of Fundraising Professionals (AFP) Triad Chapter’s Outstanding Philanthropist-Greensboro Award.

It honors individuals or families for exceptional civic responsibility and significant philanthropic contributions within the larger Greensboro community.

Nominated by UNC Greensboro, the Samets were recognized at AFP’s National Philanthropy Day 2020  on-line “Change the Triad with a Giving Heart” celebration on November 22. Their altruism has made an unmistakable impact at UNCG, in the area’s business, arts, and non-profit communities, and within Greensboro’s Jewish community.

“Sylvia and Norm have been tremendous supporters of UNCG for many years. Their tireless efforts have had an indelible impact on the lives of our students and have advanced the mission of the University. They have been exceptional leaders in our community and wonderful friends to me and my wife, Jacquie. This honor is richly deserved,” said Chancellor Franklin D. Gilliam, Jr.

In addition to serving on numerous boards and committees at the University, the Samets co-chaired UNCG’s Students First Campaign and were establishing donors of the Herman and Zelda Bernard Professorship in Jewish Studies and the Henry Samuel Levinson Program Endowment in Jewish Studies. The Samets also established the Norman G. Samet and Sylvia Lichtin Samet International Education Fund to attract outstanding students to study business in UNCG’s Joseph M. Bryan School of Business and Economics.

Founder and Chair of Samet Corporation, Norm won the Triad Business Journal’s inaugural Commercial Real Estate Legacy Award in 2019. His leadership in Greensboro’s business community includes serving as Chair of Piedmont Triad Partnership, the High Point Chamber of Commerce and the Greensboro Area Chamber of Commerce, and as a member of both Greensboro Development Corporation and the Economic Development Partnership of North Carolina. In 2013 he received the Greensboro Economic Development Alliance’s Stanley Frank Lifetime Achievement Award.

Sylvia is an honorary board member of the Eastern Music Festival, a member of the Greensboro Advisory Council of Triad Stage, and has served on the boards of the Greensboro Symphony Orchestra and United Arts Council. She is Director and Emeritus Lifetime Board Member of the Guilford Technical Community College Foundation, where she and Norm are Lifetime Members of the Honor Roll of Donors. The Samets have also made generous financial gifts to the Community Foundation of Greater Greensboro, United Way of Greater Greensboro, The Steven Tanger Center for the Performing Arts, and Family Service of the Piedmont.

The Samets are heavily engaged with several organizations that support Jewish culture and philanthropy in Greensboro and throughout North Carolina.

To quote the award nomination, “Sylvia and Norman Samet model unparalleled generosity and civic responsibility by devoting their good names, personal resources, time, energy, and giving spirits to better the quality of life for Greensboro’s citizens.”

Story by Chris Garton, Donor and Board Engagement