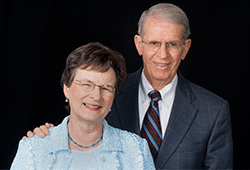 “Our gift annuity has kept us connected with UNCG and has afforded us the opportunity to meet the students who have benefited from it. It has also provided an excellent return which has been helpful in our retirement. I also make an extra gift to the spending account each year so they derive some benefit from it.”

I was born in Kinston, North Carolina, but grew up on a farm in Chatham County. I always assumed I would attend Woman’s College because my mother, aunts, and several cousins were alumnae. It also had the best School of Home Economics, which was my intended major. Since I chose to be a full-time homemaker, the education I received at WC has always been invaluable to me as a wife, mother, and citizen of the community. We did not feel we were in a position to make an outright gift in the amount we gave, so the gift annuity enabled us to make our gift because it generated an income stream for us.

At this point my fellowship does not yet fund a graduate student in nutrition, but since many of them live on a shoestring, I also make an extra gift to the spending account each year so they derive some benefit from it.

The gift annuity was my husband’s idea. He had given a scholarship to UNC, his alma mater, and he felt that it was only fair to also give one to mine.