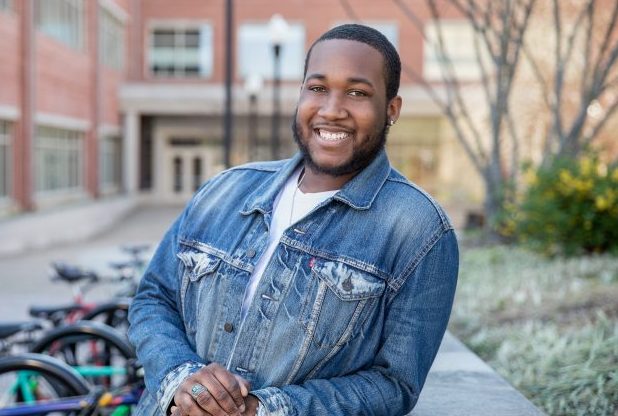 As a recipient of the Jacqueline W. and Jack H. Varner Scholarship, Qua’-Shaun Henning honors the memory of a beloved Greensboro teacher, engaging in rigorous teacher preparation at UNCG. Although their graduation classes are 60 years apart, the quest of these teachers to make a difference in the lives of children is timeless.

The Jacqueline W. and Jack H. Varner Endowment Fund was created through planned giving from the estate of Jack Varner as a memorial to his wife.

In 1958, Varner began her career in Greensboro City Schools, teaching second grade at Calvin Wiley Elementary School until 1965. She bought supplies to fulfill student educational needs as she felt necessary; some students even came to visit her at home on weekends to have a “day in the country.”

In 1966 she began teaching third grade at Alamance Elementary, where she remained until 1984, when brain tumor surgery forced her from the classroom. Despite this challenge, Varner returned to the classroom after radiation, wearing wigs throughout her final year of teaching, without a single absence. She received the Principal’s Award for Excellence in Education at Alamance Elementary in 1985. Varner retained a positive outlook, following up on former students through church and community activities after she retired. Varner passed away in 1998, but her support for students, including Henning, endures through her scholarship.

Henning shares Varner’s determination for overcoming obstacles. Childhood without paternal involvement made Henning intentionally productive in formulating his own role as a positive male mentor. During his mother’s illness, Henning developed responsibility and selflessness, assisting with household management and supervision of his younger brothers. In pursuing his goals, Henning qualified as a UNCG Teacher Education Fellow and became an active member of Campus Activities Board, Neo Black Society, Growing Young Men (NBS mentor group), and UNCG Gospel Choir. Henning was also selected by the UNCG Alumni Association as a 2017-18 Spartan of Promise, a prestigious award for seniors excelling in academics and service.

Both Henning and Varner refused to see themselves as victims, drawing strength from church and community as they pursued their goals. A relentless work ethic, combined with love of humanity, led each of these strong, positive spirits to elementary education.

The Jacqueline W. and Jack H. Varner Scholarship “gives back,” so that students like Henning can “pay it forward.”