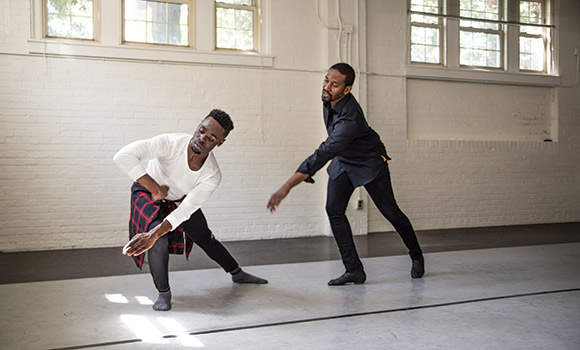 In August 2013, Bollinger Shipyard Inc. delivered its latest fast response cutter to the United States Coast Guard: the Charles David Jr. In attendance at its commissioning were members of David’s family, including his nephew Duane Cyrus, associate professor of dance at The University of North Carolina  Greensboro and founder/director of the performing and visual arts collective, Theatre of Movement.

“I never fully comprehended my uncle’s sacrifice until that moment,” Cyrus later reflected.

Coast Guard Charles W. David Jr. lost his life in 1943, after rescuing nearly 100 servicemen from drowning off the coast of Greenland. A Caribbean-American Steward’s Mate First Class on board the cutter Comanche, David repeatedly dove into frigid Atlantic waters after a German U-boat torpedoed the Army transport ship, the Dorchester. Because the military was segregated at the time, David wasn’t required to participate in the rescue operation. David, however, volunteered and his heroism ensured the lives of 93 men.

The commissioning of the CGC Charles David Jr. inspired Cyrus. For the next four years, he dedicated himself to an ambitious project: Comanche: Heroes Complexities, a multimedia performance that celebrates black bodies and explores the intersection of heroism and racial tensions through dance, film, and photography.

“My uncle’s story is fertile ground for exploration and engagement. I use research and performance to connect my students and audiences to historic, overlooked legacies.”

Comanche: Heroes Complexities wasn’t created in isolation. In addition to collaboration with Theatre of Movement artists, and support from UNCG’s College of Visual and Performing Arts and the Provost’s Office, Cyrus secured a Faculty First Summer Excellence Award. Established in 2014, Faculty First Awards—part of the Faculty First Program—support select faculty research or creative projects during the summer. The awards are highly competitive, thus their recipients represent the highest academic rigor and creativity UNCG offers.

In 2016, Cyrus used his Faculty First Award to travel to Virginia and Washington, D.C., where he first created a short film about David’s life and then researched African-American military history and the Dorchester tragedy at the National Archives. Both experiences proved integral to making Comanche an exploration of intersection.

“I realized after making the film I needed to go deeper into the history. I could create something celebrating one man’s heroism, but that would ignore the struggle and the reality of being a black man in the military at that time.”

“Comanche is a living project. It’s not fixed, like a painting you hang upon a wall. It’s organic. Ongoing and developing. The September performance wasn’t a final product; it was a beginning. With every step and every city, Comanche will grow and change. As it should, since we grow and change with everything we learn about ourselves and others.”

For more information on Comanche: Hero Complexities and Theatre of Movement, please visit their website.