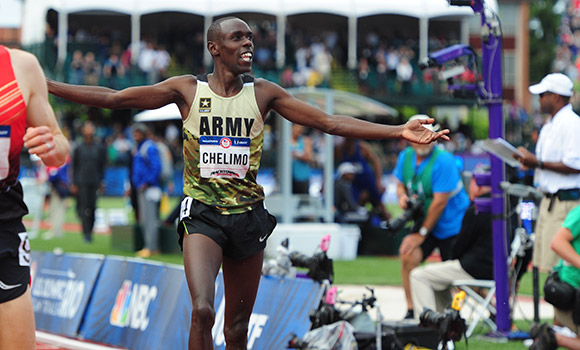 He did not disappoint. Taking the silver medal, Chelimo smashed his previous personal-best with a time of 13:03:90, becoming the first U.S. medal winner in the men’s 5,000-meter race since 1964 and finishing a mere 0.60 seconds behind gold medalist Mo Farrah of Great Britain.

UNCG erupted into cheers, high-fives, and a lot of Spartan pride. And it wasn’t just students on campus who were celebrating UNCG’s first Olympic medal winner. As Chelimo took his victory lap, social media buzzed with Spartans from across the state and beyond.

But the drama didn’t end there. Spartans everywhere held their breaths again. Told he had stepped to the inside of the first lane, Chelimo was disqualified and stripped of his second-place finish. He appealed the decision, and after an agonizing hour, the appeal was granted and Chelimo’s silver medal reinstated.

A native of Iten, Kenya, Chelimo credits his time at UNCG for his success.

“Greensboro has made me who I am today,” he said. “Being the first Olympian from UNCG is great. I thank them for uplifting my running career.”

Paul Chelimo wasn’t just a great athlete at UNCG. He was also a great student and received two prestigious scholarships, The Aaron Bobb Scholarship and the Irwin Belk Athletic Scholarship. Both are awarded to student-athletes who demonstrate levels of academic performance surpassing University standards.

The Bobb Scholarship was established by friends in loving memory of Aaron Bobb, son of UNCG’s former Director of Athletics, Nelson Bobb.

The Belk Scholarship was established by Irwin Belk, retired president of Belk department stores, former member of the UNC Board of Governors, community leader, and philanthropist. Oh, and he has also served on the U.S. Olympic Committee for more than 45 years.