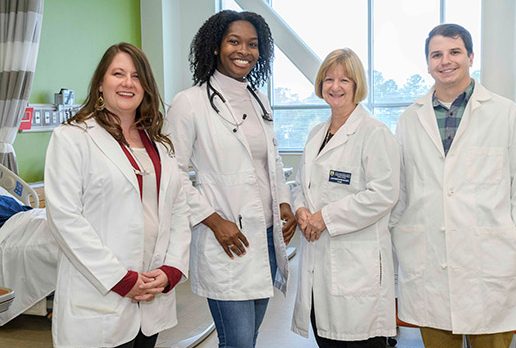 The late Blanche Rigsby Shore was a devoted mother and nurse, two distinct responsibilities with very similar task descriptions. Having successfully fulfilled both roles, Blanche’s life was staunch in providing nurture, aid, and support to those in her care — a feat her daughter, Patricia Shore Clark ’58, chose to commemorate through a donation to UNC Greensboro.

Although Patricia was a Woman’s College business student who found much success with her bachelor’s degree in secretarial administration, she established the Blanche Rigsby Shore Scholarship in Nursing in 2008. Her gift has become one of the many resources UNCG utilizes to combat an alarming shortage of nurses, occurring nationwide and especially hitting North Carolina.

This insufficiency has been a national issue for more than a decade, and the need for qualified nurses continues to increase much more quickly than the stream of professionals entering the field. The Bureau of Labor Statistics estimates that 1.2 million vacancies will arise for registered nurses between 2014 and 2022. Adding to that data, a recent report released by Georgetown University predicts North Carolina will have the second-largest shortage of nurses in the nation by 2025 — a shortfall of nearly 13,000.

Making a significant impact in waging the gap between supply and demand, UNCG graduates more than 300 nurses every year, and with the University’s Nursing and Instructional Building set to open in 2020, those numbers are soon expected to rise. Of these graduates, most will find occupations in-state — 75 percent of UNCG alumni remain in North Carolina — helping to alleviate the deficiency hurting local communities.

Since its origination, the Blanche Rigsby Shore Scholarship has assisted ten nursing students in completing their degrees, and at least eight of them currently work in our state. Their employers include UNC-Chapel Hill, Duke University, WakeMed, Wake Forest Baptist Health, and Piedmont Triad Anesthesia. Additionally, one graduate successfully started a clinical consultation business, which services the Raleigh-Durham area.

Despite the negative indicators currently surrounding the nursing profession, investments from dedicated alumni like Patricia Clark ensure UNCG will continue to play a key role in eliminating the deficit of caregivers.