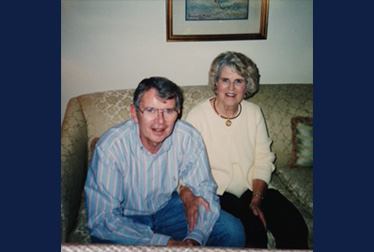 Love endures, whether the love of a parent for their child or a husband for his wife. One man wanted to immortalize his wife, her passion for her alma mater, and UNCG’s future through a gift that will span generations.

Marvin Slate and Mary Lib Manning Slate ’61 married in 1963, just two years after her graduation from Woman’s College. For decades, Marvin watched his beloved wife spread her love among family, friends, and her university. In 2013, to commemorate their 50th wedding anniversary, he established the Mary Lib Manning Slate Endowed Scholarship. The scholarship, which supports upperclassmen majoring in either economics or the liberal arts with a focus in business, has thus far helped four ambitious young men and women pursue their dreams.

“Woman’s College, now UNCG, meant, and continues to mean, so much to Mary Lib,” Marvin says. “Establishing a scholarship in her name seemed the most appropriate way to celebrate her and our anniversary.”

Mary Lib has always served her university. While pursuing her degree in economics and business administration at WC, she was an active force of support for her classmates. She served as house president of Bailey Residence Hall – working closely with beloved house mother, Lucy T. White – and was named class day chairman. She participated in numerous organizations, including the court of social regulations, the elections board, the student legislature, and the student judicial board. For her service, Mary Lib’s graduating class elected her as one of their eight Outstanding Seniors.

After graduation, Mary Lib continued to be a campus fixture. A former member of the Alumni Services Award Committee and the Board of Visitors – and now a current member of the Excellence Foundation – she attended nearly every reunion for the Class of 1961 and is active in planning class events on and off campus. She saw an opportunity during the Quad restoration to help revive her former dorm. She and her classmate, Maureen Turner Vandiver ’61, orchestrated the renovation of the Lucy T. Parlor, named after their house mother. During the process, Mary Lib grew close to the students currently living in Bailey Hall, as well as Residence Life staff. She continues to visit her old dorm, decorating the parlor and catching up with residents.

It’s that dedication her husband loves and celebrated.

“I wanted the Lucy T. Parlor to be a place of warmth and welcome,” says Mary Lib. “I wanted students to feel supported. I’m so pleased to encourage them through this scholarship as well.”

Marvin’s appreciation of his wife’s dedication and their love for one another will endure at UNCG for generations to come. And every student who receives Mary Lib’s scholarship will carry a piece of that devotion with them on their own journeys.