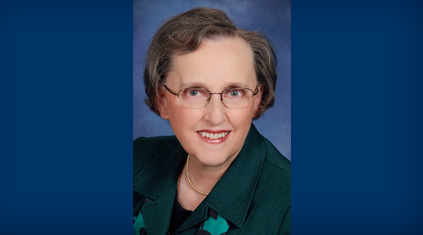 Martha Bridges Sharma has traveled to all seven continents. As a passionate geographer, she considers it her duty. Her experience at Woman’s College began a series of fortunate events, providing her with an educational foundation she continues to cherish.

“The Reynolds Scholarship certainly opened the door to an excellent education, and I am very grateful for that,” states Sharma.

A lucky moment at WC registration found Sharma searching for a class allowing her to sleep-in past eight a.m. Geography fit the bill. Despite her pragmatic excuse for taking that initial geography class, Sharma was hooked – her dynamic professors sealed the deal.

She recalls, “When I took geography, I realized that it was exactly what I was looking for.”

Sharma also just happened to have the expansive alto singing range Dr. Richard Cox in the School of Music was looking for. Cox recruited Sharma to the University Chorale, despite her non-music major status. Sharma later contributed to the university madrigals, and the opera chorus, creating meaningful memories:

“He (Cox) was an incredible conductor – a real treasure.”

Following graduation, Sharma participated in an Asian studies program at the University of Hawaii, where she met and married Narendra Sharma. Even her spousal choice seems serendipitous – after receiving his master’s and PhD, Sharma’s husband worked for the World Bank in Washington, D.C., requiring extensive travel. Accompanying him, Sharma took slides of various locations abroad to use in teaching geography at the Washington, D.C. International School and later at the National Cathedral School.

Her enthusiasm was evidenced by a student comment after an energetic classroom discussion:

Sharma continues to “like this stuff,” and seizes opportunities as they come her way.

Since 1987 she has engaged in periodic free-lance consulting for National Geographic. Her recent focus has been writing text for small format atlases in the books division. From pre-school to high school, Sharma is committed to ensuring students have up-to-date, accurate atlases.

She also applied her consulting expertise to the College Board and Educational Testing Service by creating, developing and implementing the Advanced Placement Course (and test) in Human Geography from the “ground up.”

In active retirement, Sharma continues her free-lance writing and travel. At last count, she had visited 63 countries.

She feels blessed “to have been at the right place at the right time to pursue this field of study about which I am quite passionate – but it has really been serendipity!”