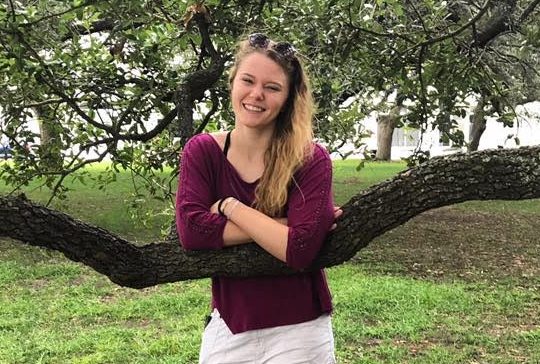 Charles “Chuck” Moyer didn’t set out to become a Spartan when he moved to Greensboro in the 1980s. The University of North Carolina at Greensboro was just the next stop on Moyer’s 36-year career with ARAMARK. What he found at UNCG, though, was something he hadn’t at Florida State University, Lambuth College, or the University of Montevallo: a home.

“I was being recruited by the coaches here,” Winslow remembers, “but I hadn’t made my final decision yet. But when I set foot on UNCG’s campus, I knew. I had this amazing feeling, like I was coming home.”

Once she signed on, the business administration major dedicated herself completely to the field and the classroom. In addition to being a student-athlete, Winslow is a member of the Lloyd International Honors College, well known for its rigor and challenges. Winslow rose to meet every obstacle. Since 2014, she has maintained a 4.0 GPA and secured three consecutive spaces on the SoCon Academic Honor Roll. She also serves as president of the Student-Athlete Advisory Council.

“Being a student-athlete is challenging, but so rewarding. I’ve developed passion, dedication, and definitely time-management. I’ve had to be a leader on the field and off it.”

Such excellence and leadership are precisely what Moyer was known for.

Moyer served as the District Manager for ARAMARK services at UNCG and the Southeast for more than two decades. During that time, he was an avid Spartan fan, joining the Spartan Club’s Executive Committee. He was instrumental in generating and maintaining interest in Spartan Athletics during the ‘80s and ‘90s, when UNCG began the transition to NCAA Division I. In honor of his dedication, Moyer’s friends and colleagues established the Charles C. Moyer Endowed Athletic Scholarship. The fund supports a member of the women’s softball team who demonstrates high ability on the field and in the classroom.

Winslow, recipient of the Charles C. Moyer Endowed Athletic Scholarship for the last three years, embodies that marriage of athleticism and excellence.

“I met Mr. Moyer in my freshman year,” she says. “He made such a huge difference to my softball career and my education, not in the least because of the lack of financial stress. But meeting someone so dedicated to my success, my team’s success, Spartan success? It’s life-changing. There aren’t many people like that.”

Winslow herself is becoming a person like that. In October 2017, Winslow was named one of ten 2017 Spartans of Promise. Supported by the year’s 50th Reunion Class, the Spartans of Promise represent the best UNCG seniors and future alumni—students renowned for their academics, their leadership and their service to others.

As her final year draws to a close, Winslow continues to soar. With a degree in administration, and a passion for higher education leadership, there is no telling how far this Spartan will go.