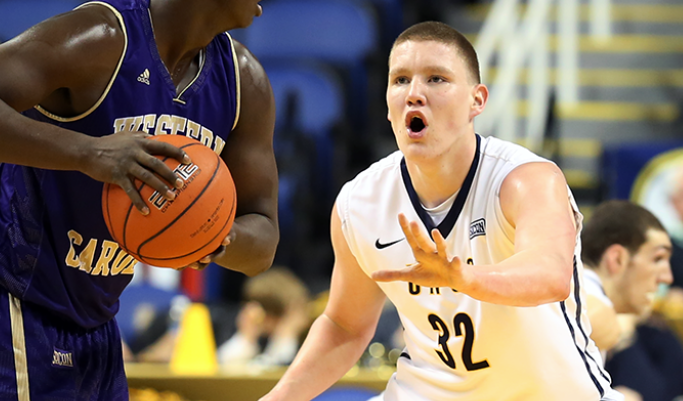 In 2008 Dr. Richard A. Beavers ’76 MA received the prestigious Southern Conference Distinguished Service Award for going “above and beyond the call” to fulfill UNCG goals benefitting student athletes. In addition to decades of membership on UNCG’s Spartan Club Executive Committee, he was committee chair (2004-06) and an avid supporter of Spartan Athletics for more than 38 years. Described as the most active and successful chair of the Spartan Club since its inception, Beavers and his wife, Sharon, hosted numerous fundraising events at their Greensboro home. In 2003 they established the Richard A. and Sharon M. Beavers Endowed Athletic Scholarship Fund.

As an ambassador for Bas van de Goor Foundation, UNCG’s Jordy Kuiper goes “above and beyond” for young people with diabetes, encouraging them to follow their dreams. The foundation endeavors to improve quality of life for people with diabetes through sport and exercise.

How do Beavers and Kuiper connect? Through Spartan Athletics. Kuiper is number 32 on the UNCG men’s basketball team that won the 2017 regular season Southern Conference title and achieved the most wins in program history. He is also a grateful recipient of the Beavers Scholarship.

A native of Groningen in The Netherlands, Kuiper was nine years old when he found out he had type 1 diabetes. His first concern was whether he’d be able to play basketball.

But beyond his time on the court, Kuiper is a motivational speaker at gatherings, including the Triad Juvenile Diabetes Research Foundation Family Conference, attended by children ages nine to sixteen. Support is reciprocal; fans become friends whom Kuiper encourages through social media.

Kuiper’s senior stats rank him 12th in Southern Conference offensive rebounds per game and 14th in rebounding. What the stats can’t convey are the bonds Kuiper forges with his teammates. Kuiper’s co-captain, Marvin Smith, and teammate Francis Alonso describe Kuiper as an energetic leader who consistently gives his all: Kuiper’s the guy who “looks out for everyone, on and off the court…he’s not selfish at all.” Other teammates see Kuiper as “the most friendly guy on campus… Everybody knows him and loves him…We call him the ‘Vanilla Gorilla.’”

The respect is mutual.

Kuiper declares, “My teammates are really like my brothers.”

When home is a twelve-hour flight away, that’s a good thing.

“I really do appreciate the support from everybody … It’s been great all around. It’s been a great ride,” Kuiper says.

Donor generosity propels students above their circumstances and beyond limitations. The Beavers’ scholarship brought Jordy Kuiper to UNCG, giving us an opportunity to appreciate this young man’s talent and character on the basketball court and beyond.