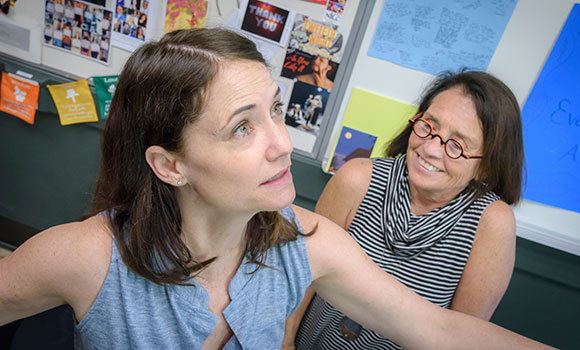 A lifelong love of film spurred North Carolina native Jennifer Leigh Mann ’16 MFA to take a giant leap of faith and move to New York after graduating with a degree in international studies from UNC Chapel Hill.

“The day I graduated from UNC – that morning – I realized I wanted to pursue acting,” Mann said.

Her first audition was for the TV series “Sex and the City.” While she didn’t score the part, she started to get more auditions, doing commercials and acting in a soap opera for several years.

“All these little things kept affirming that I was where I was supposed to be,” Mann said.

Mann returned to North Carolina, but she wasn’t finished with acting. She signed with a Greensboro agency and landed roles in the NBC TV series “Revolution” and the movie “The Ultimate Life.” Despite her success, she knew she lacked the foundational training that she needed. She looked into UNCG’s MFA program and knew that was what she wanted to do.

Mann calls the two-year program the “hardest and most rewarding thing” she’s ever done. After arriving at UNCG, Mann booked two major roles: a recurring role in season four of “House of Cards” and a part in the film “The Disappointments Room.”

“I felt prepared for those auditions because of all the hard work at UNCG,” Mann said. “I’ve made it through the program because of the support of my classmates and teachers. I feel so blessed.”

Some of Mann’s support also came from The Mary Sheila Nassif Graduate Award, created in memory of another North Carolina girl with a passion for acting. Sheila Nassif received her MFA in drama from UNCG in 1976 and, until her death in 2006, made her career in drama and theater. To honor her daughter, Sheila’s mother, Millie Nassif, established the award, given annually to graduate students in theatre for overall excellence.

What’s next for Mann? She wants to continue to do what she loves, and she wants to have an impact on others.

“I want to work in films that make a difference,” she said. “I want to be a part of something that changes people’s lives.

Now that’s cause for applause.