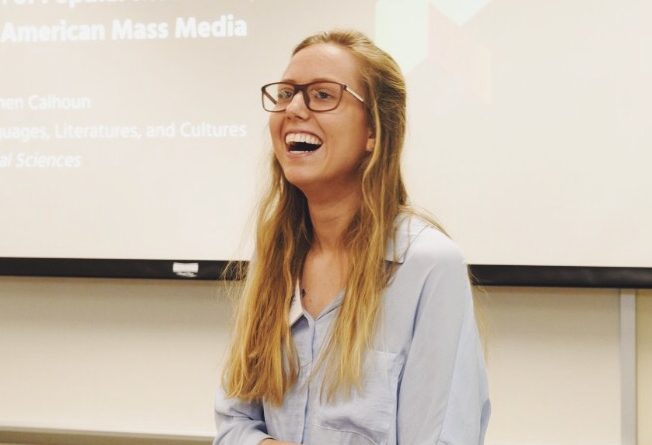 Augustine Mary LaRochelle was a Spanish professor at Woman’s College from 1922 to 1949. Born in 1892 in Victoriaville, Quebec, she came to the United States in 1897. In addition to her degrees from the University of Vermont and Columbia University, Augustine received a diploma from Centro de Estudios Historicos in Madrid, and attended summer sessions at many other prestigious institutions both in the United States and abroad. A passionate Spanish teacher and world traveler, she created the Augustine LaRochelle Scholarship Fund.

“I was raised culturally Spanish since part of my family is from Spain,” she said. “And I also spent one fourth of my life there.”

Her bilingual, multicultural childhood not only gave her a deep appreciation for the Spanish language and culture, but also for multiculturalism and world travel in general.

As an undergraduate Hispanic linguistics and global studies major at UNC Chapel Hill, Carmen taught introductory Spanish classes, and she also studied Portuguese. She traveled to Brazil, where she studied for an entire year in Rio de Janeiro. There she taught in a public school and developed a particular interest in and appreciation for Brazilian music, film and culture.

In 2015, when Carmen became a graduate student in Spanish at UNCG, she received the Augustine LaRochelle Scholarship.

Carmen recalled, “It was an honor for me, because it is a recognition of the importance of studying Spanish, especially in the United States, where Spanish remains the most widely spoken language after English.”

As a graduate student at UNCG, she continued teaching Spanish courses and also served as a tutor. For Carmen, teaching Spanish is “an important cause in an increasingly multicultural and multilingual world.”

This past summer, after earning her master’s degree, Carmen took an additional teaching course in Madrid. And she also heard the news that she had been chosen for a prestigious Fulbright Scholarship. As a Fulbright Scholar, she will live in Brazil to teach and continue her research on Brazilian art and culture.

“Ultimately, I want to complete a doctoral program in Spanish,” she said, “But through a comparative study with Brazilian culture and language.”

Carmen’s scholarship donor and namesake, Augustine Mary LaRochelle, traveled to many countries and shared her passion for travel and languages with Woman’s College students throughout her career. It may have been her multicultural origins that began her global interests, but in her academic career, she ventured far and wide in service to the appreciation of culture and the teaching of languages. Carmen Inez Calhoun carries that legacy forward.