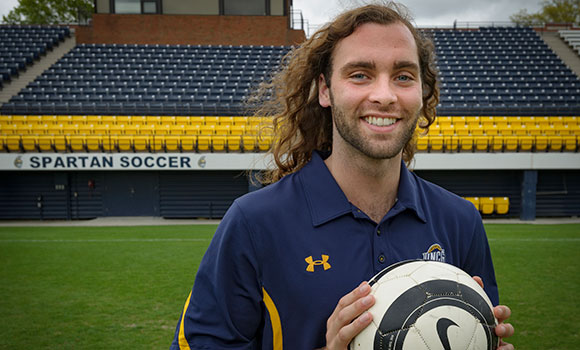 Evan Rees ‘16 was originally drawn to UNCG because of its strong soccer program. However, he quickly learned that the university offered a world of possibilities—quite literally—both on and off the field.

The chemistry major with minors in math and German focused his considerable energy on balancing athletics and academics. Not only did Rees and his teammates win a Southern Conference regular season soccer championship, but he also spent two of his summers studying and researching in Europe.

In 2015 he conducted organometallic chemistry research, funded by a National Science Foundation grant, at the Centre for sustainable Chemical Technologies at the University of Bath in England. Rees spent the summer of 2013 in Germany to learn the language of his ancestors, a trip made possible by the Anne F. Baecker Study Abroad Fund.

“The initial intrigue for me was the adventure of traveling,” Rees said. “Once I got to Germany, I ended up falling in love with the culture.”

That undoubtedly would have pleased the late Dr. Anne F. Baecker. The former UNCG professor of German and Russian and Language Department head was a native German who came to America at age 15. Foreign language education defined her life, and she strongly promoted study abroad, stressing the advantages bi-lingual students would have in their careers.

Dr. Baecker’s estate included a bequest to endow a scholarship at UNCG for study in Germany or German-speaking countries, enabling future generations of students like Rees the opportunity to hone their language skills and experience German culture firsthand.