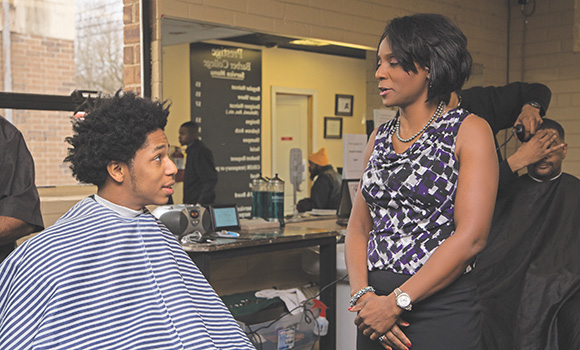 “The birds and the bees” is a difficult conversation for parents to have with their adolescent and pre-adolescent children. It is also one of the most important, according to the Academy of Pediatrics. Successful sexual health conversations directly correspond to fewer teenage pregnancies and lower rates of HIV and sexually transmitted infections in youth populations. Parents, unfortunately, often don’t share the responsibility of having these critical conversations.

“Mothers are far more likely to initiate conversations with their kids about sex and sexual habits,” says Dr. Tanya Coakley, professor of social work at UNCG’s School of Health and Human Sciences. “But fathers also need to be engaged in helping their children develop healthy sexual habits.”

The problem worsens across demographics. African-American male youth are at a higher risk of contracting HIV than White male youth, according to the Centers for Disease Control and Prevention. Approximately half of the youth population with HIV are African-American. Creating an environment for effective communication between sons and their parents—especially their fathers—is critical, and an environment Coakley is actively creating.

In June 2017, Coakley and the Leonard J. Kaplan Wellness Center hosted the “Barbershop Talk Conference,” an extension of her research on barbershops as social pillars in the African-American community. In collaboration with NC A&T State University and Duke University, Coakley and researchers focus on how barbershops in Greensboro, Charlotte and Reidsville can become effective environments for healthy communication between fathers and sons.

The focus groups revealed concerns that became the backbone of Coakley’s barbershop research.

“Fathers worry about the fine line between over sharing and under sharing,” she says. “Many of them didn’t have these conversations themselves so they don’t have the information to share, while others are concerned about intimidating their children or shutting down further conversations.”

Coakley thinks, though, that the open and comfortable “barbershop environment,” coupled with information sessions like the Barbershop Talk Conference, could provide a solution:

“The barbershop is an ideal location for fathers and sons to talk openly and comfortably with each other. With the right tools—facts and effective communication methods—they can use a familiar community space to engage in effective, healthy conversation and build an enduring relationship of open communication.”

Coakley will continue to research and monitor the effectiveness of barbershop intervention in healthy communication between fathers and sons and healthy sexual behavior in African-American young men.