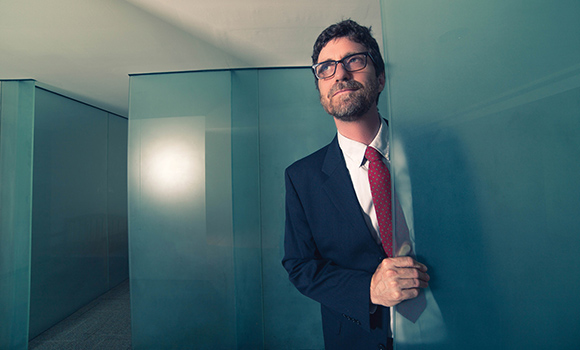 In the summer of 2014, thousands of people converged in the Indian Himalayas for the 33rd Kalachakra Empowerment, a two-week Buddhist ceremony and festival. Among them was Dr. Gregory Grieve, professor and head of the Department of Religious Studies at UNCG. He marveled at the interplay of religion and technology: the spontaneous selfies of visitors and the well-orchestrated global livestreams of ceremonies and teachings.

“Online, you miss the charisma,” Grieve reflects. “There’s value in the bodily experience, in the endurance. But that doesn’t make the digital experience of faith and spirituality less real for some practitioners.”

Grieve’s experience—and others like it, where he witnessed the intersection of faith and the World Wide Web—inspired him to write “Cyber Zen: Imagining Authentic Buddhist Identity, Community and Practices in the Virtual World of Second Life.” The monograph, published by Routledge in 2016, examines Buddhist practices in the online virtual world Second Life. A multiple-player virtual world, Second Life involves creating an avatar to represent your physical self and includes interactive objects and places, as well as millions of users to socialize with via online events, forums, and chats.

Since 2007, religion, including Buddhism, has been a large part of socializing on Second Life. Considering the growing number of people who identify as Buddhist, including Americans, understanding the virtual turn of religion is critical.

“Cyber Zen” asks if typing on a keyboard count as “real” Buddhism. Grieve argues it does, in a way: “Online Buddhism practices have only a familial resemblance to Asian traditions, but if they are judged existentially—by how they let us respond to suffering generated by living in a consumer society—then Second Life Buddhism does consist of authentic spiritual practices.”

Grieve completed his monograph with the support of a prestigious Faculty First Summer Excellence Award. Established in 2014, Faculty First Awards—part of UNCG’s Faculty First Program—support select faculty research or creative projects during the summer. The awards are highly competitive; thus their recipients represent the highest academic rigor and creativity the university offers.

“Cyber Zen” does more than document religious events on the internet; it examines how technological advances are changing fundamental human experiences.

“25 percent of Americans have searched the internet for religious purposes,” Grieve explains. “In a world where technology at once connects and disconnects us from each other and the world around us, we must understand how technology changes our society and the human experience.”

Grieve’s research continues, focusing on online Buddhist rituals and specifically the Dalai Lama. The spiritual leader of the Tibetan people, the 14th Dalai Lama routinely reaches out to the global Buddhist community through digital communication channels like Facebook and YouTube.

The internet is creating a new place of worship, one without walls.

“People are looking for community,” Grieve says. “What previous generations found in churches and civic clubs, people are now searching for through their screens.”