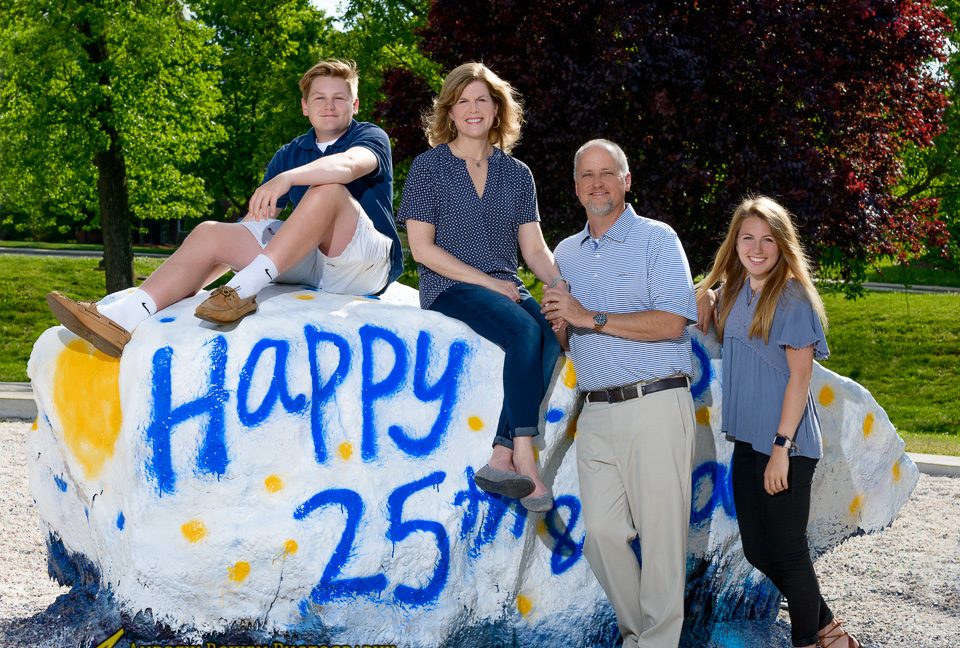 Nestled between Jackson Library and Moran Dining Hall is “The Rawk”: a 12.7 ton rock donated by the Alpha Phi Omega fraternity in 1973. Today, the boulder is a sturdy student message board, bearing spray painted signs from individuals and student organizations. Messages remain for 24 hours before students can tag the Rawk anew.

But on May 8, 2018, the Rawk sported an unusual message. On one side: “Our story began here. Jacqueline

“It was just a thought,” says Jacqueline DeBrew ’91, a professor of family and community nursing at UNCG. “We were going to take anniversary pictures on campus, and I thought it would be great to paint the Rawk. My daughter was all for it, so we made it happen.”

Jacqueline met her husband, Clint, in 1988 during their sophomore year at what was once Adam’s Bookstore on Tate Street. Introduced by mutual friends, Clint – a business major with a concentration in marketing – offered Jacqueline – a nursing student – a ride back to her dorm. Jacqueline declined, but when they met again a month later, they hit it off.

Their life together has seen career changes and a growing family, but Clint and Jacqueline never forgot their alma mater. When Jacqueline joined the School of Nursing as faculty in 1997, they became part of the Spartan community once again, this time as supporters.

“It started as an opportunity to do things as a family,” says Clint ’91, now a sales lead for Building Materials & Construction Solutions. “But as our own kids got involved in sports, we saw the positive effect athletics has on students and communities. We also saw how difficult it is for students to juggle multiple roles. We want to ease that burden.”

The DeBrews have long been advocates for Spartan students. In addition to supporting the Bryan School of Business’s Suit Up Event – which provides professional wear for eager future businessmen and women – the couple regularly contribute to the Spartan Athletics Scholarship Fund. Their gifts provide financial support to UNCG’s Division I athletes, and they have seen firsthand how that affects student-athletes’ college careers. Their student – Taylor Delaney, a junior on the women’s cross-country team – has become a fixture in their lives.

“She and I text quite often,” Jacqueline says. “It’s wonderful to see her thriving and to know we have helped her maintain excellence in the classroom and on the field.”

The DeBrews’ 24 hours on the Rawk is long past, but their impact on our campus remains. As their anniversaries come and go, more students will benefit from the love they found at UNCG.