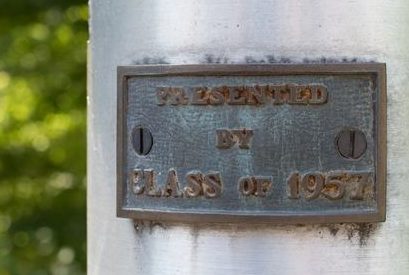 The place I study
The classmate at my side,
The classroom or the ballroom
Where my friends have laughed and cried,
The ‘howdy’ and the handshake,
The air of feeling free;
The right to speak my mind out—
That’s Woman’s College to me.”

Woman’s College of the University of North Carolina was a lively place in 1957.

In what is now UNCG Auditorium, students heard quintessential American poet Robert Frost read, the Philadelphia Orchestra perform, the actor Henry Hull present “An Evening With Mark Twain”, and saw a concert by modern dancer José Limón and his company, in the same year dance was introduced into the college as a major.

The students themselves performed in “Oedipus Rex,” “A Midsummer Night’s Dream,” “Hedda Gabler,” and “The Glass Menagerie.” In the Rosenthal Pool, the Dolphin-Seal Club presented their water-based plays and musical fundraisers. In 1957 students hosted WUNC TV, learning the craft of television production. Many performed in the Woman’s College Band and with the Woman’s College Choir.

They took breaks at “Yum-Yum” across the street and in The Soda Shop that once occupied the Faculty Center. They strolled in Peabody Park and took boats out on the newly acquired Piney Lake.

They were Golden Chain Society members, leaders in a strong student government association, editors of the Coraddi literary magazine, staff members for the Pine Needles yearbook, and reporters for The Carolinian campus newspaper. They even oversaw the construction of a house on North Elm Street in Greensboro, learning atypical skills for American women in the 1950s.

Katherine Taylor was their dean of students, Mereb E. Mossman their dean of instruction and Miss Grogan their house mother – all fondly remembered by the Class of 1957.

At their 50th reunion, the Class of 1957 presented UNCG with the second-largest gift in the school’s history of class gifts. The funds went to UNCG’s Students First Campaign, supporting undergraduate and graduate scholarships and faculty development, ensuring the class’s legacy of high-quality academics and unmatched opportunity and access on a vibrant, diverse campus.

In one of UNCG’s most beautiful locations, the historic Foust Park, the American flag flies from a flag pole that bears their class year on a small vintage plaque. This mark recalls their time spent at Woman’s College, their contributions to the campus community, and their long-lasting, spirited pride in their university.