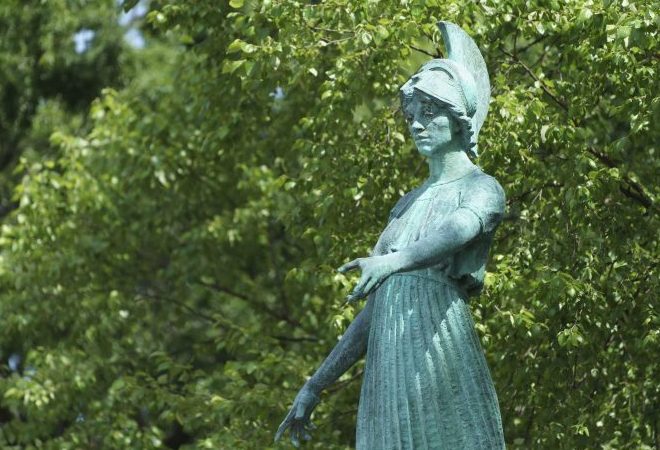 WC continued to grow. Edward Kidder Graham, Jr., son of a former UNC President, was the fourth chancellor of Woman’s College in 1953. After receiving his bachelor’s and master’s degrees at UNC, he earned his PhD in medieval history at Cornell University, where he subsequently worked for a decade. He served on several college faculties and was a president of the Association for Higher Education, a member of the national selection committee for Fulbright awards, and a consultant for the Department of Health, Education, and Welfare.

In celebration of their 50th anniversary (2003), the Class of ‘53 honored UNCG’s traditional patron, Minerva, Roman goddess of wisdom. They commissioned a new statue of Minerva to replace the original statue, a gift from the Class of 1907; they also provided for upkeep of the space around Minerva through the Class of 1953 Minerva Garden Endowment. Created by sculptor James Barnhill ’82 MFA in 2003, the statue graces the entrance to Elliott University Center. One of the pedestal panels is inscribed with a quote from Proverbs:

The Class of ‘53 alumnae support today’s UNCG students with a quiet space to rest, reflect, and become inspired.