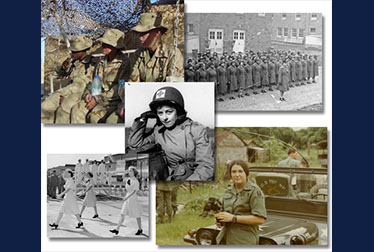 You can find a lot of amazing things in the University Libraries Special Collections, located in UNC Greensboro’s Jackson Library. Some items, though, have a very special history. Among them: a WWII Navy Women Accepted for Volunteer Emergency Service (WAVES) officer’s cap and winter uniform; and a 1943 group photograph of Navy WAVES officers and enlisted posing in front of an airplane at the Naval Air Technical Training Command (NATTC) in Memphis, Tennessee.

What makes these artifacts unique? Precious military memorabilia such as these were presented to the Alumni Association in 1992 from grateful veteran alumnae. When the pieces were transferred to University Archives in 1997, they became the core of what is now one of our most prestigious collections and on-going projects.

“Women’s involvement in our armed services is a history that has been long ignored,” says Beth Ann Koelsch, curator of the collections. “The Women Veterans Historical Project reclaims that history through the contributions of hundreds of veterans across the state and nation.”

At the heart of the project are personal interviews with veterans. At once humorous and vulnerable, these oral histories provide valuable perspectives on service as the forces integrated genders in every branch of the military.

“UNCG has the largest academic repository of oral histories in the nation, with more than 450 interviews,” Koelsch observes. “We hope to expand the scope of their accessibility but that requires a lot of help.”

Charlotte Holder Clinger ’65 was more than happy to provide such help. After graduating from Woman’s College, she enlisted in the U.S. Air Force as a combat intelligence officer. Her career was marked with extraordinary firsts: first woman stationed with the 553rd Reconnaissance Wing, first female wing executive officer at Korat Royal Thai Air Force Base in Thailand, first woman to command the CIA’s Joint Military Reserve Training Command unit. During her retirement, she was grateful to provide an inside view at what it was like to experience the “fog of war” as one woman among hundreds of men. But she knew her story was not the only one to tell.

In 2014, she established The Colonel Charlotte Holder Clinger ’65 Oral History Fund in the Betty H. Carter Women Veterans Historical Project to support the collection by offsetting the costs associated with it, including travel expenses, accommodations, and transcription services.

“Colonel Clinger was a groundbreaker,” says Koelsch. “We are incredibly grateful for her service to the nation and her support of the Project.”

The Women Veterans Historical Project – now collecting stories from UNCG student veterans and local Greensboro veterans – hopes to provide online audio and text synchronization of the oral histories in the near future. With the help of veterans and donors like Colonel Clinger, this incredible project will continue to grow, paving the way for better understanding of women’s critical roles in American military history.