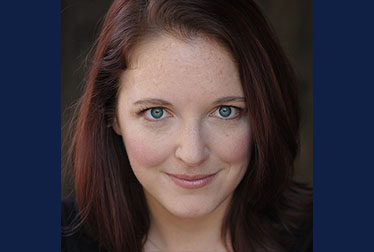 Graduate student Bryanna Hanson-Vinge was on her first trip to the Big Apple to perform in the UNCG Theatre Industry Showcase, along with her husband, fellow MFA actor Zach Vinge. The two Minnesotans wanted to see a show in the Village, but didn’t know how to get there. Professor of acting Jim Wren rescued the two “New York newbies,” teaching them the ins and outs of the NYC subway system. The same director whose formidable expertise challenged his students to grow onstage, also supported them offstage as they navigated the real world. Committed faculty and the Kathryn McAllister England Graduate Scholarship in Theatre were pivotal factors in Hanson-Vinge’s UNCG experience.

England taught speech and theatre at UNCG from 1942 until her retirement in 1975 and was respected for her commitment to high standards in scholarship and performance. She directed several plays, including “Alice In Wonderland” (1943), for the Playlikers theatre group at Woman’s College. After her death in 1977, friends and family decided to commemorate England’s work, establishing Kathryn McAllister England scholarships in communications and theatre.

“The Kathryn McAllister England Graduate Scholarship in Theatre … has afforded me the ability to purchase many texts outside those required for my courses, specifically in my field of interest in voice. The England Graduate Scholarship also provided a financial cushion when I traveled to NYC for Showcase and allowed me to be present and engaged in the work I had traveled to do, rather than worrying about the financial ramifications of doing so.”

Hanson-Vinge discovered an unexpected passion for vocal training and theatre for young people while studying at UNCG:

“What I’ve also loved in being here is the support from the program and faculty in my love of theatre for young audiences. … I’ve been cast by Jim Wren in a main stage TYA show, written a one-act children’s piece in Janet Allard’s playwriting class … (and) been encouraged by Chris Morris to use my vocal training and knowledge to build a voice program for young children.”

“Receiving the generosity from scholarships like this really helps artists like myself live in the work rather than in the worry.”

Whether she chooses voice, theatre for youth or both as her acting emphases, Hanson-Vinge’s future should hold more work than worry. Post-showcase interest from The Collective NY theatre group, whose founding members include actress and comedian Amy Schumer, may give Hanson-Vinge her chance to become an NYC subway system expert.