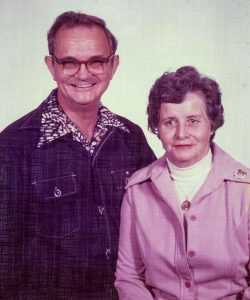 Made in 1975 by UNC Greensboro School of Business and Economics faculty member Dr. Roscoe Jackson Allen and his wife, Anna Mae Burchette Allen, the gift created a scholarship honoring their son Charles, who died while serving in the U.S. Navy. Charles had planned to study business administration after completing his military service, and the Allens wished to remember him by helping young people with financial struggles pursue an education in business.

Since its establishment, the Charles Burchette Allen Scholarship Fund has grown exponentially. Mae Allen established a second scholarship in memory of her husband two years after his death in 1984, and together the funds are now one of the largest resources for financial aid in the Bryan School. To date, the Allen Scholarship Funds have supported hundreds of students and are valued at well over a half-million dollars.

For the duration of her life, Mae remained diligent in making additions to the funds, often to honor a friend or neighbor. Other family gifts widened the scope of the Allens’ legacy at UNCG, a legacy their extended family continues.

Daughter Risa Allen Witherspoon ’75, ’80 MEd recalled a 2016 family reunion where cousins brought fabric squares to decorate with family members’ handprints. The fabric was made into a quilt and auctioned at another reunion two years later, the proceeds of which were donated to the Charles Burchette Allen Scholarship Fund.

Until her death in 2010, Mae, accompanied by Risa, attended every annual Bryan Scholars and Donors Luncheon to meet the beneficiaries of her scholarships. Risa has assumed the mantle of family matriarch at the luncheons, now joined by her sons Jay ’06 and Allen ’09, both Bryan School alumni themselves.

“Our family enjoys having relationships with these students,” said Risa. “They’ve had diverse backgrounds, some from right down the road and others from different countries, but all are dedicated to their studies.”

Many are first-generation college students, which Risa says would have pleased her father, as he was the first in his family to earn a college degree.

Growing from $500 to now more than $600,000, the Allens’ endowed funds have created opportunity for hundreds of aspiring business professionals and untold economic impact for the communities where they are employed. Now that’s an impressive return on investment!

Coming from a low income family and being the only member of my family in the United States, I understand how important resources are. Being given the opportunity to have these resources from donors to pursue my goal leaves me with nothing more than pure thankfulness.