State of the Campus Address 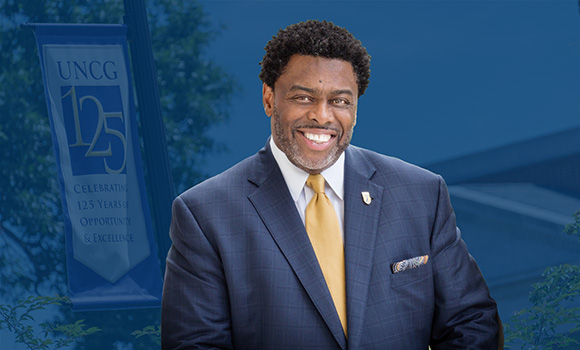 UNCG Chancellor Franklin D. Gilliam, Jr. marked the beginning of the new academic year this morning with a simple, yet impactful call to the campus community: “We are just getting started.”

During his annual State of the Campus Address to faculty and staff in UNCG Auditorium, Chancellor Gilliam remarked that this past year was one of “Giant Steps” for UNCG.

New facilities, such as the Leonard J. Kaplan Center for Wellness, transformed campus life. UNCG Athletics broke records – both on the court and in the classroom. The School of Nursing, the Weatherspoon Art Museum and Athletics celebrated milestone anniversaries.

But these successes are only the beginning of what’s to come.

Chancellor Gilliam reflected on the unique history of the university: the foundational era from 1891-1962, and the era of expansion, which began in 1963 when the university became coeducational.

Now, we’ve reached a new era: the era of Giant Steps, a time for UNCG to more boldly step into the spotlight.

“When people talk about the top public institutions in this region, we need to be in that conversation,” Gilliam said. “We want to be front and center.”

So how can the university continue to develop into a top school of choice in the Southeast? By solidifying the strength of academic programs, raising overall visibility, improving graduation rates and competing for athletic championships, to name a few.

UNCG has already made significant strides this fall, announcing new co-admission programs with local community colleges, preparing for the opening of Spartan Village II and beginning work on the new Millennial Campus districts.

“We’ve come a long way, but we have farther to go,” Gilliam said. “And I believe – deeply believe – that we are poised now, more than ever, to take Giant Steps.”