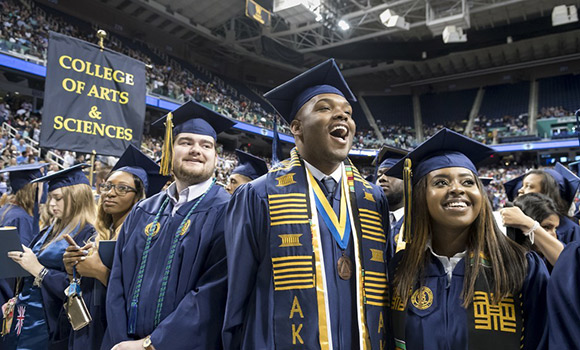 A sense of pride and accomplishment was palpable in the Greensboro Coliseum on Friday, December 8.

Commencement speaker Terry Akin, CEO of Cone Health, left the new graduates with three lessons he’s learned over the course of his life: Never stop learning, have integrity and be kind.

Akin encouraged the Class of 2017 to have a growth mindset – to learn and become better each day.

“There is a reason this is called commencement. It’s a beginning,” he said. Namely, the beginning of a new learning journey.

“If you want to be inspired by the thought of lifelong learning, look no further than your own fellow graduate,” he said.

Akin encouraged the Class of 2017 to act with integrity by honoring commitments and being transparent.

And above all else, he implored them to be kind.

Degrees were conferred, tassels were turned and cheers rang out across the coliseum.

And with that, more than 1,800 new UNCG alumni began the next chapter of their lives.