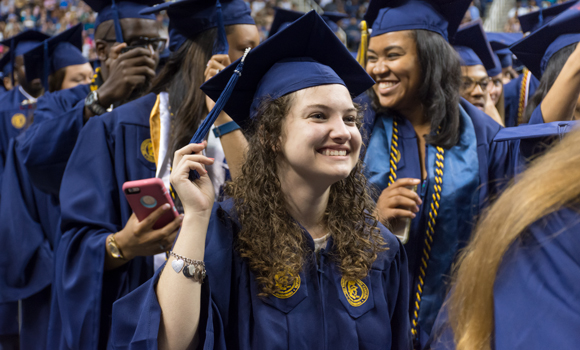 More than 2,600 Spartans joined the ranks of UNCG alumni this morning at the 2017 May Commencement ceremony at the Greensboro Coliseum.

The celebration was full of smiles, selfies and inspiring speeches, including the highly-anticipated address from Margot Lee Shetterly, author of the book “Hidden Figures,” which was made into a major motion picture.

Her message to the Class of 2017? Dream big. Have courage. And don’t forget to use your talents to support others.

Shetterly shared the story of Mary Jackson, NASA’s first black female engineer, to inspire the graduates to fight for their dreams.

“The world may often be blind, indifferent or even hostile to your talents, your ambitions, your feelings and your dreams,” she said. “If you want something – if you are audacious enough to dream something – there’s a good chance that somewhere along the line, you’re going to have to fight for it. Nobody knew this better than Mary Jackson.”

Not only did Shetterly share the inspiring story of Jackson, but she reminded the graduates of their special connection to NASA’s female mathematicians – known as “human computers” – whose stories are told in “Hidden Figures.” UNCG alumna Virginia Tucker ’30 was one of five women to join the first human computer pool at Langley Memorial Aeronautical Laboratory (now Langley Research Center) in 1935. By the early 1940s, Tucker was the head computer, tasked with managing hundreds of women in computing sections across the laboratory.

“Many women from UNCG followed in Virginia Tucker’s footsteps,” said Shetterly, noting that UNCG and Hampton University (known then as Hampton Institute) had the largest number of alumni in the human computer program during the early days of NASA. “So graduates, you are connected to the rich legacy of individuals who made lasting contributions to aeronautical research and the American space program.”

As the more than 2,600 Spartans prepare to leave UNCG and embark on a new adventure, Chancellor Franklin D. Gilliam, Jr. encouraged them to savor the moment of their accomplishment.

“Know this,” he told the graduates. “You are ready.” Gilliam praised the quality of UNCG’s faculty and programs, and reflected on the shared goal of taking giant steps forward. “Today’s the day that marks the start of your giant steps. Think big, think bold.”