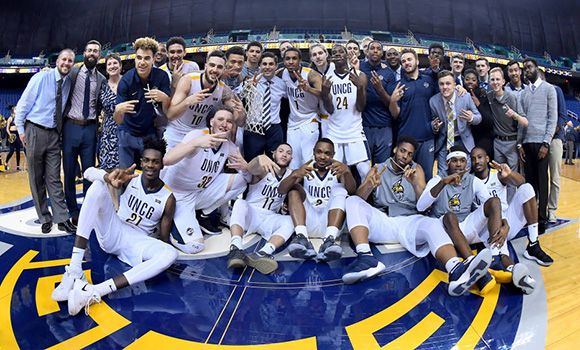 It was a familiar scene at the Greensboro Coliseum.

A ladder, a pair of scissors, and players beaming with pride as they cut down the net.

For the second straight year, the Spartans are regular season Southern Conference champions.

The UNC Greensboro men’s basketball team defeated Samford 88-75 in its last regular season game of the year on Sunday. The victory secures the No. 1 seed for UNCG in the upcoming SoCon Tournament, as well as the SoCon automatic bid in the National Invitation Tournament (NIT).

UNCG is now 24-7 overall and 15-3 in SoCon play. But the Spartans aren’t finished. Their sights are set on the SoCon Tournament in Asheville this weekend – a tournament championship will secure a spot in the NCAA Tournament.

Read the full game story at uncgspartans.com, and check out the social media highlights.