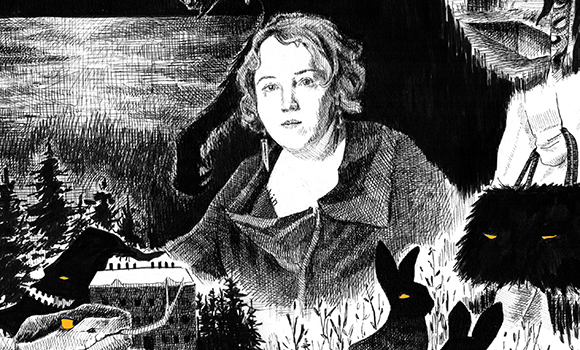 She is the author of four books of stories in which ordinary people fall into conversation with the extraordinary, mythical, and fantastic.

A handbag that devours things, including the narrator’s boyfriend. A house where unseen vacationers demand constant care. An ex-vampire nursing heartbreak on the set of a nudist ghost-hunting show. A family haunted by rabbit statues. A grave-robbing poet who unearths the wrong ghost.

Link’s stories, however, are more than a fanciful parade. They ponder interior life as they keep characters between two worlds, what Link describes as “daytime logic” and “nighttime logic.”

Her first two books, “Stranger Things Happen” and “Magic for Beginners,” were first published through Small Beer Press, which she runs with her husband, Gavin J. Grant. Link’s third book, “Pretty Monsters,” was released by Penguin and her most recent, “Get in Trouble,” comes from Random House.

What do we learn by combining the mythical or fantastic – “nighttime logic” – with the post-post-modern realism – “daytime logic?”

The way that I think of daytime logic is that, whether or not it’s at work in a genre like science fiction or in a realistic novel about a failed marriage, it maps onto the reader’s sense that the world works in a way where we feel at ease with the rules by how life ‒ or magic ‒ operates.

Consequences and actions have power because we can see how they will play out. Nighttime logic has a more nightmarish quality ‒ the reader is a little more at sea. Fairy Tales have a nighttime logic to them.

Most stories probably have both kinds of logic at play, because this is how we experience the world and therefore how we represent it when we write. We go about the world, trusting that the rules that we live by will hold. But in life, and also in fiction, there are moments when a great chasm of strangeness and dislocation seems to open up in front of us.

What are some of your characters’ favorite emotions? Least favorite?

Longing is such a powerful engine. Spleen and self-interest too. I like complainers and worriers and equivocators and even more so, characters who give in to pettiness or greed. And I also dearly love characters who wish to be better people and do the right thing. I don’t know that I have a least favorite emotion in fiction. I’ll take the selection box. (She said greedily.)

What’s your philosophy on connecting with a reader?

Perhaps this goes back to the question of nighttime logic ‒ as a reader, I’m very happy to be immersed in something strange and pleasurable that I can continue to mull over. I’m interested in questions and a little dubious about answers. With the more difficult stories, I try to make sure that there are enough pleasures on the level of sentence sound and imagery and dialogue and character to buy space to ask questions that I have no intent of answering. Which is not to say that the reader shouldn’t come up with their own answers and their own questions.

Young writers who come through the UNCG MFA program, and other MFA programs, cite you as an influence. Is there any word of advice you’d like to offer?

My feeling about influence is that you should read the writers who your influences were influenced by. And you shouldn’t lose sight of the things that you are most interested in pursuing that are going to lead you off on your own wild goose chases. Chase those geese! Pay attention to the things that bring you pleasure, not the things that are “good.” Pleasure is the greatest source of material.

How is your novel going? It will be published by Random House?

I’m currently on a writing retreat somewhere so warm that my fingers get sweaty when I type. Which is a useful thing to focus on, because then I can be irritated by that instead of by the sentences themselves. I’m beginning to hit the beginning of the end, I think. I hope that I’m discovering that there’s something I can do at novel length that would be impossible to do at short-story length. But what? Not sure yet.

And yes, Random House will publish it.