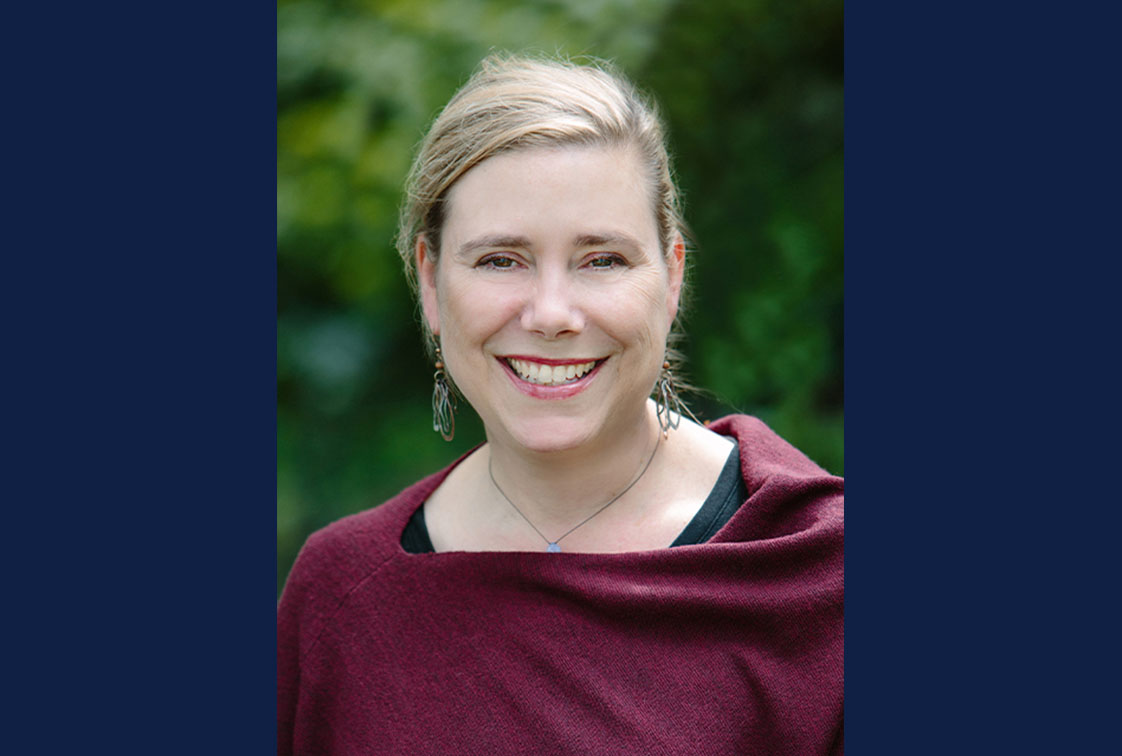 Literature and community-building – those are the themes that have grown throughout the career of UNC Greensboro alumna Ruth Dickey ’04 MFA.

The graduate of UNCG’s MFA Program in Creative Writing has taught poetry workshops in soup kitchens, drop-in centers, and the DC public schools, and she has held an array of leadership positions that have given her the ability to connect communities with writing and literature.

As the new executive director of the National Book Foundation, Dickey is now one of UNCG’s most public-facing alumni, starting May 17, when she assumes her new role.

Dickey has served as executive director of Seattle Arts & Lectures (SAL) since 2013, and prior to that was executive director at the Clifton Cultural Arts Center (CCAC) in Cincinnati, Ohio, where she led the repurposing of a vacant school into a thriving arts center. She also directed New Futures in Burien, Washington, partnering with families to create literacy-supportive communities, and Miriam’s Kitchen, a breakfast and social service program for people experiencing homelessness in Washington, DC. During her tenure there, the organization executed a successful $1.4 million capital campaign to begin transitional housing and was selected as the Winner of the 2001 Washington PostAward for Excellence in Nonprofit Management.

Before being selected for the NBF director role, Dickey partnered with the National Book Foundation in a number of ways – collaborating on a James Baldwin project through SAL’s Writers in the Schools Program, partnering to provide free tickets for a SAL event with National Book Award winning author Min Jin Lee, and Dickey served as a judge in 2019 for the National Book Awards in fiction.

Dickey is also a published writer herself. “Mud Blooms” from Harbor Mountain Press was selected for the MURA Award, after being a finalist for the National Poetry Series, and it also won a 2019 Silver Nautilus Award for books that make a better world.

She holds a BS in foreign service, and an MA in Latin American Studies from Georgetown University, in addition to her MFA in creative writing from UNCG.

University Communications spoke with Dickey this month to get a picture of how her career unfolded, including how UNCG’s program and community shaped her direction and experience of the literary landscape.

What do you remember about coming to UNCG’s MFA program?

I think one of the things that I remember most about UNCG is just how welcoming the program, the staff, the community was. I moved to Greensboro from Washington, D.C. And I was arriving alone in my U-haul. The team from the MFA office helped me find an apartment, and when I got there, the whole MFA crew came out and helped me unload my truck. Even the former program director Jim Clark was out there moving boxes. And I was just so I was in awe of all of them. And I was like, “Oh, my gosh, Jim Clark, literary legend, just helped me move my boxes!,” and it was the kindest, most authentic welcome. That’s really the spirit of the program, and the place. And throughout my time in Greensboro, I really felt so welcomed and just learned so much. I came as really a sponge; my undergraduate degree was not in poetry. And I had been out working in the world for almost 10 years when I came back for the MFA. So, there was so much I didn’t know. All the poets, all the teachers I studied with – I felt so incredibly lucky to learn from, and with all of them, I soaked up all the knowledge I could possibly get. And I think the thing I’ve carried with me, throughout my writing career, is that idea of the importance of graciousness, and of making spaces where people feel welcome.

No matter where people are from – maybe they’ve read everything in the canon, and they’re super experts, or maybe they’re just coming into poetry. Making spaces where really everyone feels authentically welcome is something I’ve tried to carry and hold. And also, that small gestures can be incredibly powerful – the shared barbecues, time on porches, moving boxes together.  I think one of the wonderful things about MFA programs is artistic community, and that we find and nourish artistic community together. That, I know, was a huge gift for me.

Could you describe your career path?

My whole path has combined two questions, really: How do we build just, vibrant, inclusive communities that work for everyone? And how can access to arts experiences, and especially books and reading and writing, help contribute to building that just world? When I finished up my undergraduate degree, I went to Georgetown in DC, and then I joined an AmeriCorps program called Vista, which is like the domestic version of the Peace Corps. I was placed at a soup kitchen. And it was a unique program – there were 20 of us who did outreach with people experiencing homelessness. That was my job, trying to figure out how to build connections, and I knew I loved writing. So, I said to a bunch of people, “If we had a workshop after breakfast and read and wrote together, would you want to stay?” And enough of them said, “Well, sure, I’d stay for that.” Partially I think people stayed because it was warm, and there was more coffee, but I said, “Okay – let’s do it!” So, I started a writing workshop, which I ended up running for seven years at that breakfast program, working with folks experiencing homelessness, and then that ended up with me teaching for a program called Writer Corps, which put writers in different communities. There was an outpost in DC and in the Bronx, and in San Francisco. It was an amazing group of folks that were in that cohort, so I got to learn from all those writers. A. Van Jordan, a poet who ended up teaching at UNCG was a writer in Writer Corps. Ta-Nehisi Coates, Jeffrey McDaniel, Joe Ray Sandoval, Imani Tolliver, Nancy Schwalb, Gary Lilley were all in Writer Corps also. So, really, my introduction to writing was a writing-based community and the idea that writing that is accessible to everybody. And then my whole career has kind of braided those threads of the idea of building community, and community around books and writing.

What accomplishments in your career are you most proud of?

At heart, I’m a builder. What I really like to do with organizations is to help figure out what the organization does well, how it can best be in service to the community, what the community needs, and then work with the board and staff and community to develop a vision of what’s next, and then help the organization grow to do whatever that next big thing is. So different organizations have meant that it’s different things. When I worked with Miriam’s kitchen in DC, it meant moving from just serving breakfast to starting an arts engagement program and case management, and then starting transitional housing. On my path after the MFA, I came to the Seattle area and worked with a group called New Futures that worked on site in low-income apartment complexes. And there we doubled the number of kids and families were able to work with, but then I moved to Cincinnati and ran a group that took a vacant elementary school and transformed it into a vibrant art center that engaged over 70,000 people in its first couple of years. So that idea of growing and building is really exciting to me. And I think that’s what I’m proud of: being part of helping groups reach for big dreams together.

What are you looking forward to about being the director of the National Book Foundation?

I want to begin by saying that I think it’s so important to come with humility to any work. So, I think, I won’t know until I spend time really listening to the staff, the board the community and learn deeply about what they have been doing and what are their dreams for the future, and then together, we’ll figure that out. But I am excited.

Under the former director Lisa Lucas’ leadership, the foundation really grew from being mostly awards to doing lots of different important work to engage and support readers all around the country. Part of the National Book Foundation’s present work is the Literature for Justice Project, which I think is so exciting, looking at mass incarceration, and how we have conversations as a community through books about the most important issues. They also do an incredible program called Book Rich Environments, where they distribute books in public housing authority complexes nationwide. Growing that type of work is exciting to me.

Another thread of work that I think is really interesting is that in this pandemic moment, the National Book foundation worked with Community of Literary Magazines and Presses and the Academy of American poets and the Mellon Foundation to distribute emergency funding to literary organizations all across the country. Thinking about how the National Book Foundation can be a resource to the literary ecosystem is a really exciting question and thread of work to lean into. So, I’m excited to listen and learn on those fronts and then see what we can dream up together.

What advice would you offer to young writers like those in the MFA program UNCG right now or those who are interested in public literacy?

For writers, I would say, “Keep writing because the world needs your voices. The world needs an incredible diversity of voices and stories.” One of the great gifts of my time at Seattle Arts and Lectures, where I’ve been for almost eight years now, is that we do two different things. We bring the best writers and thinkers of our time to Seattle to give talks, and then we hire local writers to work in the public schools and the Children’s Hospital. And in listening to all the writers who have come, one of the things that has really blown me away is how many of them have said they spent years and decades just toiling away and submitting and getting rejected, rejected, rejected, rejected. Both Viet Thanh Nguyen (Pulitzer Prize Winner) and Ben Fountain (PEN/Hemingway award winner) – I was really struck they each had this figure of 17 years, that they wrote and submitted for 17 years with only rejection until things came together for them. After my time in the MFA at UNCG, studying and learning about craft, I had to get that lesson, listening to those writers, that what matters in writing is that you keep writing and that the world needs your voices. And if you keep at it and really believe in your work, eventually, good work will find its way into the world. So that’s my writer’s advice. And then for public connections, I think there are so many opportunities for writers to be of service to communities. There have been bubbling talks about that idea of what a Works Progress Administration could do right now. That’s what we need as a country to help with healing. But I think on an individual writer level, there’s so much possibility for working in the schools, working in community centers, working with communities that have not necessarily had access to writing opportunities and opportunities to talk about books together. And there’s incredible value in that, for building community and for elevating stories. I think any writer who is interested in that work can find a meaningful way to be involved.