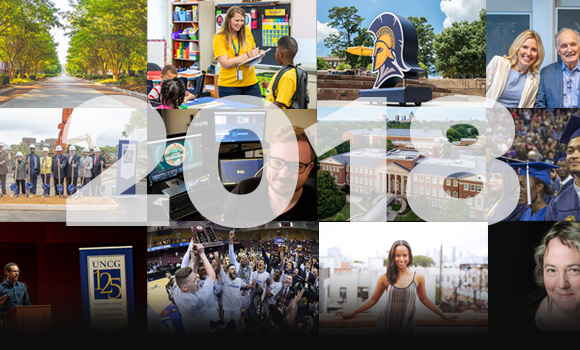 Over the past 12 months, UNC Greensboro has arrived at what Chancellor Gilliam calls an “inflection point” – a critical moment in the University’s history.

As he wrote in a message to the campus community in August, UNCG is “poised to become a national model for how a university can blend opportunity, excellence, and impact to transform the lives of individual students while at the same time making a major contribution to the prosperity of the state.”

In 2018, the University has done just that. UNCG graduated the largest-ever class in May, enrollment surpassed 20,000 students in the fall, and the University was recognized time and time again in national ranking lists for academic excellence and its student success efforts. Faculty research made national headlines, a new brand campaign was launched, and athletic teams won championships.

It’s been a year to remember, and the momentum continues.

In no particular order, here are some of the top UNCG moments from 2018:

In May, more than 2,700 students turned their tassels – the largest class in University history.

Alumni across the country made their mark. Kelly Link ’95 MFA was named a 2018 MacArthur Fellow, Ashlei Chestnut ’15 landed a lead role in the new Amazon Studios series pilot “Panic,” Emily V. Gordon ’01, ’03 MS/EdS and her husband, comedian Kumail Nanjiani, received an Oscar nod for their film “The Big Sick,” which was nominated for Best Original Screenplay, and DJ Summit ’03 helped design motion graphics for the 2018 FIFA World Cup.

Men’s basketball earned its first NCAA Tournament berth since 2001, and almost notched a bracket-busting upset against Gonzaga in the first round.

In the fall, UNCG unveiled a redesigned Spartan and launched a new brand campaign: Find your way here.

Moss Street Partnership School – a collaboration between UNCG and Rockingham County Schools and part of the UNC Lab School Initiative – opened its doors to 420 students in August. The school features a brand-new curriculum, updated classrooms, and new technology for students. Read more about the school at UNCG Now.

Construction began on the new, state-of-the-art Nursing and Instructional Building. The 180,000-square-foot facility is slated to open in the summer of 2020. Read more at UNCG Now.